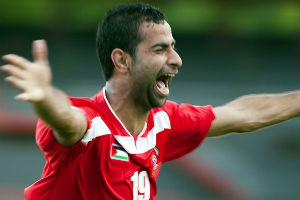 Substitute Abdulhamid Abuhabib scored deep into stoppage time to hand former semi-finalists Palestine a stunning last-gasp 1-0 victory against Kyrgyzstan in the opening game of the AFC Challenge Cup on Monday. In a hard fought clash in searing heat between two evenly equally matched teams, a draw appeared to be on the cards at the National Stadium in Male, Maldives.

However, having been brought on by coach Jamal Mahmoud just after the hour mark, Abuhabib blasted home the winner from just outside the six yard area in the 96th minute to secure a valuable three points for 2012 semi-finalists Palestine in the Group A opener.

“I knew he would create chances,” said Mahmoud of Abuhabib.

“I hope we win the next game, and then get to the semi-finals. We played very well tactically.

“It was extremely hot and Kyrgyzstan were very difficult opponents.”

With the game kicking off in high afternoon temperatures, Kyrgyzstan striker David Tetteh created the first chance as he shot over the crossbar after four minutes.

Two minutes later, Khader Abuhammad responded for Palestine with a similar shot from outside the penalty area.

After half an hour, Palestine’s Rami Al Masalma then nearly got on the end of strong cross from the left.

And it was Al Masalma who had the best chance of the first half with a close range header from a corner on the stroke of half-time, although he failed to guide his effort on target.

Both sides traded blows in the second half with Palestine’s Abuhammad firing straight at the Kyrgyzstan goalkeeper in the 55th minute.

Team-mate Ashraf Al Fawaghra also nearly got onto the end of a through ball three minutes later.

Kyrgyzstan’s Akhildin Israilov, the skilful midfielder leading many of his team’s attacks, then fired a shot over the crossbar in the 60th minute.

Several more exchanges occurred with Palestine impressively standing up to their bigger and more physical opponents.

And the moment of glory was eventually left to Abuhabib in the dying seconds when a corner came in from the left and the striker netted with virtually the last kick of the game.

“We were two equal teams. Whoever scored first would win. We had no time to equalise after they scored,” said Kyrgyzstan coach Sergey Dvoryankov

“It was very close with both sides having clear cut chances. I was happy with the movement of my players.

“They won’t be affected by this result psychologically. They are very experienced and know that we can still qualify for the semi-finals.”