AKIPRESS.COM - Tampa Bay Times has published a list of 7 surprisingly weird jobs the world has to offer.

The Dutch capital is widely known for its elegant canals and the approximately 2 million bicycles pedaled by its residents. Combined, they result in the necessity for a very special kind of job: the bike fisherman.

As Public Radio International reported, the workers use hydraulic claws to pull about 15,000 bikes out of the water per year. They've been doing it since the 1960s, and there is no threat that they'll be out of a job anytime soon.

But why do Dutch people toss their bikes into canals en masse? There are various explanations, but some argue that it all comes down to history: Canals in Amsterdam used to be the city's sewage system.

Moreover, bikes are seen as cheap tools of transportation by most people in the Dutch capital, rather than as expensive investments. None of the bikes that end up at the bottom of Amsterdam's canals is likely to be the newest model.

2. In Germany, there are garbage detectives

You threw batteries or other items into the trash, which you were not supposed to do? Well, beware Germany's garbage police!

Their job is to search other people's trash to find items that should have been disposed of differently. Germany has one of the world's toughest laws in that regard.

And according to German TV channel ProSieben, the detectives take their job quite seriously: They will ask your neighbors, examine shopping bills and observe your garbage cans to prove your wrongdoing.

3. In Britain, you can get paid for lying in other people's hotel beds

You don't have to dig in other people's trash to find the weirdest job you never wanted to have. How about being a "human bed warmer"?

In 2010, a hotel chain launched a unique experiment by offering human bed-warming services, according to Reuters. The news agency reported that willing staffers dress in an "all-in-one fleece sleeper suit" before entering a guest's room to warm his or her bed before the guest's arrival. Speaking to Reuters, a spokeswoman for the company was quoted as saying that the service was "a bit like having a giant hot water bottle in your bed."

So, why would the hotel chain not simply offer hot water bottles? A hotel spokeswoman was unable to answer that question, back in 2010.

4. In China, you might consider a career as a fake businessman or executive

You have no professional experience, but look good in a suit? You might qualify for a job as a fake executive in China.

At least, that's what Mitch Moxley described in an account for the Atlantic. Moxley said he was hired by an American company to represent it in China. "No experience necessary – which was good, because I had none," the author recalled of the job description.

Moxley was paid $1,000 a week for simply being in China, shaking a few hands and watching movies. Why? "Recruiting fake businessmen is one way to create the image – particularly, the image of connection – that Chinese companies crave," Moxley explained.

5. Have you ever thought about becoming an ant vendor?

There is not that much to say about this weird profession: You're being paid to sell ants.

There are about 12,000 different species of ants in the world, so selling ants might actually be more complicated than you think.

6. In Indonesia, there are passengers-for-hire

When the streets of Indonesia's capital, Jakarta, kept getting more crowded in the 1990s, the municipal administration enforced a consequential rule: during rush-hour, there should be at least three people in each car.

To allow drivers to cheat that rule, passengers-for-hire emerged. They wait along crowded streets to be picked up by drivers, in order to fulfill the minimum occupancy per car. 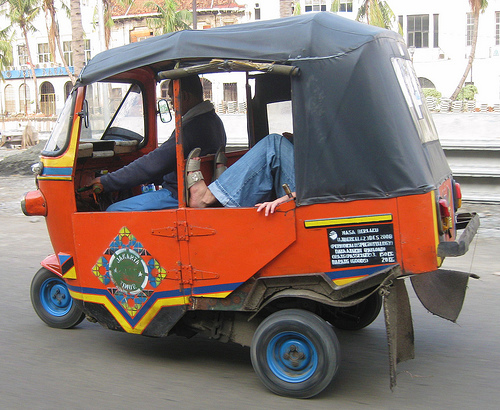 According to the Jakarta Post, passengers-for-hire do not earn a lot of money, though. Those asked by the newspaper earned a bit more than $1 per ride. Asked about the law's efficiency, one of the passengers-for-hire replied: "Of course it doesn't work. It just creates job opportunities for people like me."

7. Finally, you could also work as an airport scarecrow

Officially, you'll be called a "specialist for biological aviation safety," but in practice, you'll be a human scarecrow.

Your daily routine: you receive a call that dozens of birds are waiting on a German runway where a plane is about to land, so you rush to your car, fire several warning shots to disperse the bird crowd, as described by German daily newspaper Frankfurter Allgemeine Zeitung. Most of the time, however, you will try to prevent birds from even entering the vast properties of airports.