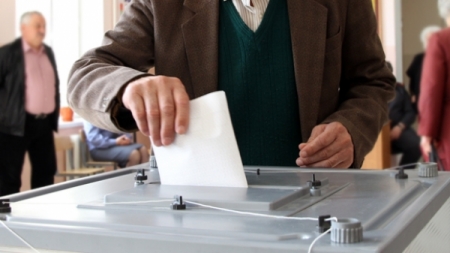 The Government of Switzerland will allocate additional CHF 600’000 ($619,259) to the project “Strengthening Democratic Practices in the Election Processes in the Kyrgyz Republic” with the goal to support the efforts of the Kyrgyz Government in this area, the Embassy of Switzerland said in a release.

The additional funding will support the Central Election Commission and the State Registry Service to carry out trainings for more than 9,000 operators of automated ballot boxes and of biometric voter identification equipment in order to focus on accuracy and transparency of voting results. Switzerland will entrust the implementation of these training activities to UNDP.

Previously the amount of CHF 1.8 million ($1,857,777) had been allocated for elections. Now in total Switzerland will contribute CHF 2.4 million ($2,477,036) to support democratic practices in the upcoming parliamentarian, municipal and presidential elections in 2015-2017. The overall goal of the entire project is to contribute to the efforts of the Kyrgyz authorities to reform the election process. It includes financial assistance for the purchases of ballot-boxes as well as technical assistance to carry out civic education and observation of elections by civil society organizations. More than 200 sets of automated ballot-boxes will be provided to polling stations in cities such as Karakol, Kant, Naryn, Jalal-Abad, Batken. The project will also strengthen the election dispute resolution system by training judges, parties and law enforcement bodies on the new electoral system.

“During President Almazbek Atambaev’s visit to Switzerland in March 2015, the Swiss support to the election process was discussed. During the conversation Swiss President Simonetta Sommaruga welcomed the democratic process under way in Kyrgyzstan and assured the Kyrgyz President of Switzerland’s support for the upcoming elections”, says the Ambassador of Switzerland to the Kyrgyz Republic, René Holenstein. “Fair and transparent elections will contribute to fostering peace and stability in the country and the grant from Switzerland will be a strong political support to the Kyrgyz authorities and to civil society organizations in a critical moment for the development of the country”.