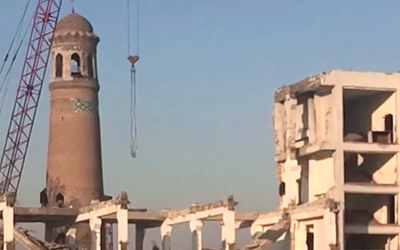 Uzbekistan has abandoned plans to demolish a 700-year-old minaret in the eastern city of Andijan, BBC reports.

Local historians and conservation campaigners noticed last month that council mock-ups for a redevelopment of the city center replaced the minaret with a fountain, and wrote to Prime Minister Shavkat Mirziyoyev to complain. Officials from the government's own Department of Cultural Heritage and the UN culture agency UNESCO also raised concerns.

After the story was picked up by independent and social media, the government sent a special commission to the city. Officials "met the local people who had filed the objection, heard what they had to say, and decided to ban any demolition of the minaret," senior culture ministry official Abdusafiy Rakhmonov is quoted as saying.

The redevelopment had been launched by the Prime Minister himself, and work was due to start in March. But billboards showing the proposed fountain layout have reportedly now disappeared from outside the Jami mosque complex, of which the minaret is a prominent feature.

Earlier, an official within the city council said the minaret had been earmarked for demolition over concerns that it couldn't withstand the powerful earthquakes which can occur in the region. Local conservationists also pointed out to the visiting commission that the minaret is already fitted with metal anti-earthquake supports to prevent a collapse.