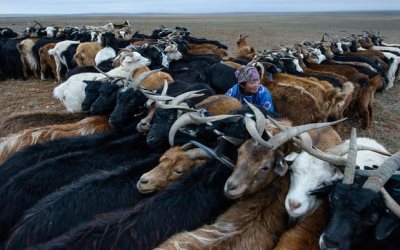 Mongolian pastureland is dwindling rapidly as the country is beset by a cycle of drought and harsh winter that is killing off livestock in droves, reports The Guardian.

“The summer ends early now and the fall is short and dry. Then there’s the long winter,” said Daashka, a 19-year-old herder who uses just one name and lives in the central Ulziit region.

The family’s herd, mostly sheep and goats, has shrunk from about 1,000 animals to 600, Daashka said, leaning against the motorbike on an exposed patch of dirt that, in other years, would have been covered by the roots of grass and other vegetation.

Mongolia is experiencing a natural disaster called dzud. The phenomenon, unique to the country, usually occurs after a summer drought is followed by heavy winter snowfall that makes already scarce pastures inaccessible to livestock.

In the past, the country experienced widespread dzud about once in a decade, but they have recently been occurring every few years. Experts say the rising frequency is due to a combination of climate change and human activity, which has increased the size of herds to levels the grasslands cannot sustain.

With temperatures dipping below -40ºC in the evenings and extreme cold expected until April, Daashka’s family saved enough money to buy feed, which they hope will keep their herd alive until the spring.

Other nomads have not been so fortunate.

Half a mile away, about 100 dead goats and sheep were piled up among the rocks. The family was elsewhere with what remained of their herd, leaving one goat clinging to life near the relative warmth of a yurt, the traditional tent dwelling with a coal-burning heater inside.

Mongolia’s foreign ministry last month asked for aid to help deal with the dzud. It estimated that about $4.4 mln is required for emergency vehicles, warm clothes, medicine and food to assist herders, in addition to hay, animal feed and vaccinations to keep livestock alive.

But the government has stopped short of declaring a state of emergency, which is required before some international agencies can allocate funding for emergency relief.

Impassable roads covered with thick snow and ice are making it difficult for aid workers to reach herders. More than 400,000 people in the northern and western parts of the country are at risk, with millions of livestock facing starvation in the weeks and months ahead, the Red Cross said in an appeal for funds last week.

“Global warming is causing about 50% of the problems and local forces cause the other 50%,” said Purevjav Gomboluudev, head of climate research at Mongolia’s information and research institute of meteorology, hydrology and environment.

About half of Mongolia’s 3 million people rely on livestock production. But with oversupply, prices have plunged on animal products such as milk, wool, meat and camel hair.

“Consequently, there is an incentive to increase animal numbers, leading to the colossal numbers we see today, at over 50 million head of livestock, which degrades the precious pasturelands,” said Robert Schoellhammer, country director for the ADB.

The trend has been devastating when combined with climate change.

The average temperature in Mongolia has increased by 2.1ºC since 1940, more than double the rise of average global temperatures, according to the UN Environment Programme. In its 2014 global climate risk index, the advocacy group German Watch ranked Mongolia the eighth most vulnerable country to direct economic losses from weather-related events.

According to a government report, 70% of pastoral land has been degraded, with less variety of vegetation. The intensification of dry conditions has increased the frequency of forest fires, which cut total forest area by 0.46% annually.

As more pasture is absorbed into the vast Gobi desert, the ancient herding lifestyle is disappearing with it. Paradoxically, the more their way of life is put at risk, the more herders engage in practices that put it in danger.

“Most herder families want to increase their herd so they can increase their income,” said Uranchimeg, a herder in Bayankhongor province who attended university in Russia in the 1980s but chose the fresh air and open spaces of a nomad’s life over taking a job in a city.

“That is making things more challenging for everyone,” she said, looking out across the barren, snow-covered landscape.