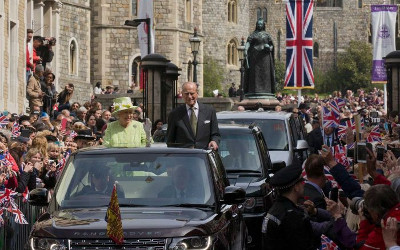 Queen Elizabeth greeted thousands of well-wishers from across Britain and beyond as she celebrated her 90th birthday, demonstrating the world's oldest monarch's intent to keep doing the job she has performed for more than six decades, reports ABC.

Usually the Queen's birthday passes with little ceremony but to mark Thursday's milestone a beaming Elizabeth, attired in a light green outfit, mingled with crowds during a lengthy walkabout near her Windsor Castle home, west of London.

In a rare move in recent years, she then drove through Windsor in an open-topped car with Prince Philip, her husband of 68 years, by her side.

"All of us are here to respect the queen and to show her our affection and how much we appreciate all her years of service and to wish her a happy birthday," said Donna Werner who had traveled to Windsor from Connecticut in the United States.

Donna Werner, like many others in the crowd festooned with red, white and blue, had been camped out since before dawn along with three English friends she met during the 2011 wedding of Elizabeth's grandson William and his wife Kate.

Later the Queen lit a beacon, the first of about 1,000 across Britain and worldwide to mark the occasion.

There were also artillery gun salutes in London and other British cities, while the Houses of Parliament were to be illuminated in red, white and blue.

Close aides say Elizabeth, who has been on the throne for 64 years and is by far the oldest monarch in British history, was far more interested in events to mark her 90th birthday than she had been about overtaking her great-great-grandmother Queen Victoria last September as Britain's longest-reigning sovereign.

A poll last week found 70 percent wanted her to stay queen compared to 21 percent who thought she should abdicate or retire.