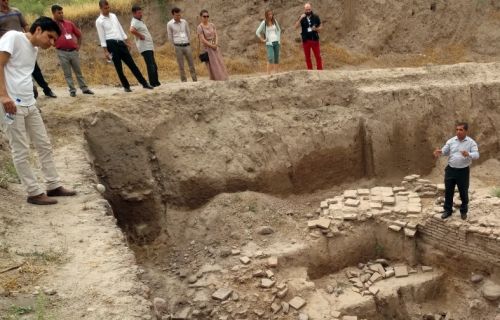 Combating the illicit trade in cultural property and the smuggling of historical artifacts was the focus of a week-long workshop organized by the OSCE for representatives of Tajik Border Troops, Customs Service, State Committee of National Security, the Ministry of Culture and Ministry of Internal Affairs, in Dushanbe from 11 to 15 July 2016.

The workshop, organized by the Border Security and Management Unit of the OSCE Transnational Threats Department and the OSCE Office in Tajikistan in co-operation with the OSCE Border Management Staff College, examined the trafficking of cultural property and smuggling of historical artefacts as an emerging trend for funding organized crime and terrorist organizations. The workshop also highlighted the roles of the responsible agencies in addressing the problem.

“Being the first workshop of its kind organized by the OSCE, we were shown that this is not only an issue of cultural protection but that it has become a serious transnational security issue as well," said Ambassador Markus Mueller, Head of the OSCE Office in Tajikistan. “As such, and bearing in mind its complexity, this problem can be tackled efficiently only by increasing the knowledge of the officers from different government agencies as well as through promoting co-operation among them."

During the workshop, participants heard from experts at the OSCE, INTERPOL, the United States Department of Homeland Security, the United Nations Office on Drugs and Crime, the Greek National Police’s Department Against the Smuggling of Antiquities, the UNESCO Office in Afghanistan and the Afghan Customs Service. They shared their experiences on cross-border co-operation in identifying the trafficking of cultural property cases and financial investigations into the smuggling of historical artefacts.