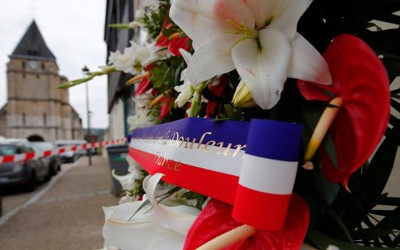 The murder of Father Jacques Hamel has triggered a bout of reflection among the French on a subject they normally avoid: their relationship with Catholicism and Christian ethics, according to BBC.

Like most European countries, France is in a post-religious phase of its history. Few attend church, and politicians who speak of "Judaeo-Christian" values are often dismissed as right-wing throwbacks.

And yet what the reaction to the jihadi murder campaign of the last 18 months shows is that people are far more influenced by their cultural and religious inheritance than they care to realize.

Since the killings began, there have been no crowds on the streets of Nice or Paris chanting "Death to Islamic State". Instead of flaming torches carried in angry procession, there are candles of remembrance.

No-one in Saint-Étienne-du-Rouvray turned their attention to the nearby mosque. In the last 18 months, there has been no significant increase in crimes that target Muslims.

Instead there was the Archbishop of Rouen, Dominique Lebrun, on Tuesday saying that in the church of St. Etienne there were "three victims" – Father Jacques and the two killers.

"Forgive them – they know not what they do," were the words he later quoted from the gospel.

No-one in the country was shocked by the church's reaction to the murder of one of their own – no thirst for vengeance, no anathema against Islam; instead a plea for forbearance and understanding.

As the Archbishop of Paris, Cardinal Andre Vingt-Trois, put it: "Our belief in Christ should make us now not fighters and militants, but men of peace, reconciliation and love."

Broadly – stripping out some of the religious language – this is the same message that the politicians are giving out.

From the Socialist government, but also from the center-right opposition, comes the constant argument: the aim of IS is to make us hate each other; they want our Muslim population to be isolated; they want acts of vengeance. Never let us cede to that temptation.

Even the far-right – though some might not like to admit it – falls within the mainstream now. When a party commands the vote of a quarter of the population, it can hardly be dismissed as unrepresentative.

And yes, it does call for tough measures like the expulsion of foreign offenders and stringent limits on immigration.

But there has been no visible far-right backlash. No arm-banded march-pasts in the banlieues. The Front National gives voice to an angry and often inarticulate part of the French population, but it has not gone down the way of violence.

Of course this might change – and the great fear today is that fringe elements on the nationalist far-right decide to take the law into their own hands. That way lies civil conflict and nightmare.

But so far one is bound to observe that the country has reacted to this horrific succession of provocations with good sense and an eye on the higher values.

Related content
8 IS terrorists captured in Syria, nationals of Uzbekistan, Kazakhstan, Tajikistan among them
Family of 7 people arrested in Tajikistan for attempt to join IS
Significant number of Islamic State militants 'originated from Central Asia,' Putin's special emissary says