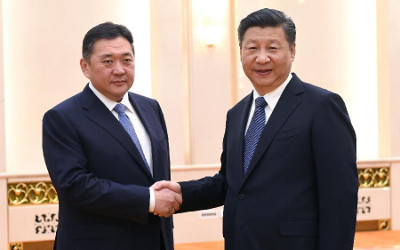 Chinese President Xi Jinping called for more concrete exchanges with Mongolia in terms of governance and interaction between the two ruling parties, according to Xinhua.


Xi made the remarks while meeting with Miyegombo Enkhbold, Chairman of the Mongolian People's Party (MPP) and Chairman of the State Great Khural, Mongolia's Parliament.

Hailing the sound momentum of China-Mongolia ties, Xi said both countries have placed great focus on each other when developing their respective foreign policies.

The Communist Party of China (CPC) and the Chinese government have pursued relations with Mongolia from a strategic standpoint and with a long-term perspective, he said, vowing to enhance coordination and cooperation with the country to boost bilateral all-round strategic partnership.

Enkhbold, who is on his first China trip since taking office in July, spoke highly of the Belt and Road Initiative and China's friendly diplomacy toward its neighbors.

"[China has] provided guidance for deepening bilateral ties, maintaining regional peace and stability and boosting cooperation with countries along the Belt and Road," he said.

The Belt and Road Initiative, proposed by Xi in 2013, refers to the Silk Road Economic Belt and the 21st Century Maritime Silk Road. It will be a trade and infrastructure network connecting Asia with Europe and Africa along the ancient trade routes.

Enkhbold said that the parties of Mongolia, though they may hold ideological differences, all agree to enhancing ties with China.

The MPP values its friendly ties with the CPC and expects closer exchanges, he added.