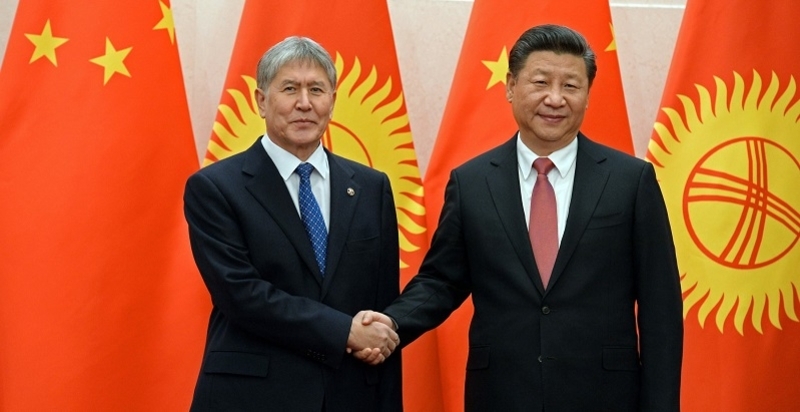 The pledge came out of a meeting between Chinese President Xi Jinping and Kyrgyz President Almazbek Atambayev in Beijing. During the meeting, the two leaders agreed to jointly combat the "three evil forces" of terrorism, separatism and extremism.

This year marks the 25th anniversary of the establishment of diplomatic relations between China and Kyrgyzstan, said Xi, saying bilateral ties have reached an unprecedented height.

Xi attributed the achievements in bilateral ties to the adherence to the principle of good-neighborliness, mutual respect, equality, mutual benefit and win-win cooperation by the two sides.

The two countries have demonstrated mutual support on issues regarding each other's core interests and concerns and maintained close communication and coordination on major international and regional affairs, said Xi.

He said China and Kyrgyzstan have become true good friends, neighbors and partners.

China is willing to work with Kyrgyzstan for new highlights in cooperation and to push forward the bilateral strategic partnership, he said.

Xi spoke highly of the achievements by the two nations in the Belt and Road Initiative, calling on the two sides to speed up construction of major infrastructure projects, enhance cooperation in production capacity, promote cooperation among small and medium-sized enterprises and dovetail the Belt and Road Initiative with the Eurasian Economic Union.

China is ready to deepen coordination with Kyrgyzstan within the framework of the Shanghai Cooperation Organization (SCO), he said.

Atambayev said China is an important strategic partner of Kyrgyzstan and has provided huge support for the country's prosperity and stability.

Kyrgyzstan is willing to enhance cooperation with China in the areas of infrastructure, agriculture and the Belt and Road construction, he said.

He said Kyrgyzstan firmly supports China's efforts in safeguarding its core interests and will continue to stick to the one-China policy.