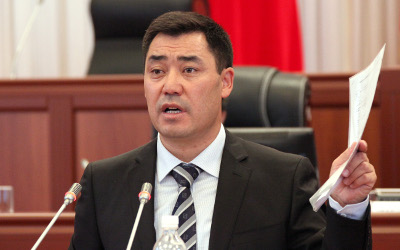 Sadyr Japarov, a former member of the Parliament of Kyrgyzstan, was detained and taken to the National Security Committee of the country on hostage-taking probe today, sources in GKNB told AKIpress.

No details were reported.

Japarov served as member of the Parliament of Kyrgyzstan of the 5th convocation. He was earlier detained by GKNB and placed in the detention center of GKNB for 48 hours for participation in the rally in Bishkek for nationalization of Kumtor Gold Mine. Then the Pervomaisky district court decided to arrest him for 2 months in the detention center for public calls for forcible seizure of power and an attempt to seize power.

In October 2012, GKNB said the mental examination revealed that Japarov is mentally healthy. After, a criminal probe was launched against him.

In November 2012, the Pervomaisky district court decided to extend the term of his detention until January 3, 2013. On March 29, the presiding judge Adylbek Subankulov sentenced him to 1.5 years in prison. The court found him guilty for forcible seizure of power or forcible confinement of power.

In June 2013, the Bishkek city court declare Japarov not guilty for the named charges, but the Supreme Court has fully quashed the acquittal and found him guilty. Japarov was released because of the expiry of the term of imprisonment (1.5 years).

In August 2013, the Central Election Commission for referendums of Kyrgyzstan at the meeting has adopted a resolution on early termination of the powers of Sadyr Japarov.