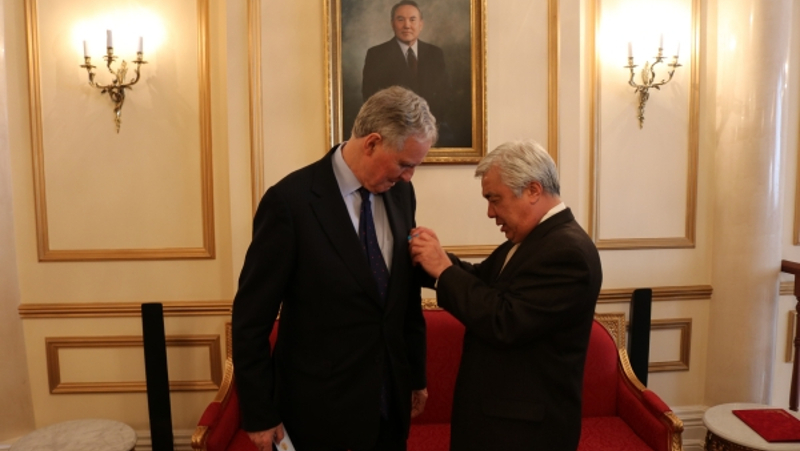 AKIPRESS.COM - Ambassador of Kazakhstan to UK Erlan Idrissov presented Jonathan Aitken, a well-known British author and public figure, a medal "25 years of independence of the Republic of Kazakhstan," the Kazakh Embassy in UK said.

"Handing the medal, Ambassador Erlan Idrissov noted that the award is the recognition of Mr Aitken's contribution to making Kazakhstan popular in the world and promoting its global reputation. He said that Mr Aitken’s books Nazarbayev and the Making of Kazakhstan and Kazakhstan: Surprises and Stereotypes. After 20 Years of Independence are regarded as important sources to present a new Kazakhstan and the outstanding role played by President Nazarbayev in building and developing the country to the world," the release read.

The Kazakh Ambassador has also pointed out that Mr Aitken’s books are the evidence of recognition by the international experts of the success Kazakhstan has achieved during 25 years of independence.

Mr Jonathan Aitken for his part thanked for the award and said he is very proud to be the first western author to write the biography of President Nursultan Nazarbayev. He said he was very honored to tell the global community about great progress of the independent Kazakhstan and its leader, as well as key international initiatives of the country.

The UK author has stressed that within 25 years, Kazakhstan has turned into an economic locomotive in the region and one of the world's dynamically developing states. The economic and political reforms taking place under the leadership of President Nazarbayev, are an important step in further developing of the country.

Mr. Jonathan Aitken is a British author and former member of the UK Parliament and Government. He is the author of biographies of Richard Nixon, US President, and Baroness Margaret Thatcher, the UK’s former Prime Minister. In 2009, Jonathan Aitken has published the books Nazarbayev and the Making of Kazakhstan about President Nazarbayev. In 2011, the book Kazakhstan: Surprises and Stereotypes. After 20 Years of Independence was published.