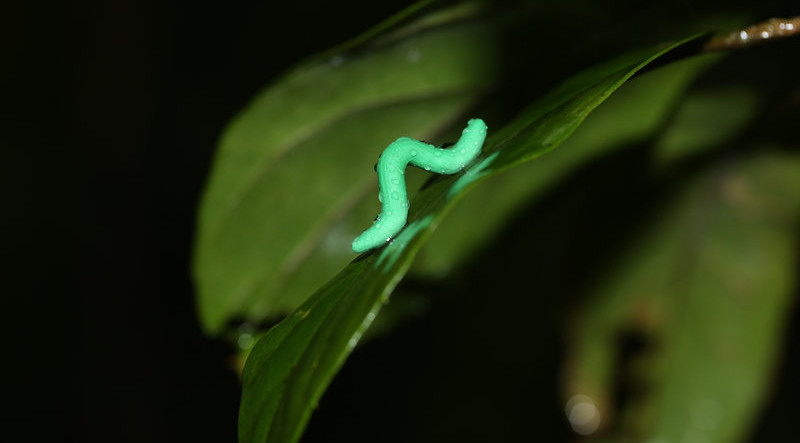 AKIPRESS.COM - Dozens of scientists recently glued fake green caterpillars onto plants around the world in an unusual study to see how the caterpillars' risk of getting eaten varied from pole to pole.

Any ant, slug, lizard, bird or beetle that attacked the soft clay caterpillars left telltale bite marks that were later analyzed by a lab in Finland, NPR reported.

It turns out the risk of being eaten was eight times higher at the equator than close to the poles, according to a newly published report in the journal Science.

"I mean, it sounds kind of like child's play, I realize," says researcher Liz Nichols of Swarthmore College. "But this kind of massive, simple, standardized technique is really powerful when you can implement it at a global scale in a really well-replicated way."

The idea for the study came when researcher Tomas Roslin at the Swedish University of Agricultural Sciences was trying to use fake caterpillars to study predation risk in Greenland. He says it's an old technique that's been around for a long time. But he wasn't having any luck — predators just weren't attacking the dummy caterpillars.

When he talked about his problem with his colleague Eleanor Slade at the University of Oxford, she told him she'd had a lot of success using them in rain forests in Borneo. The pair realized that a caterpillar's risk of being eaten might vary around the globe. And they figured they could find out by asking scientific friends, and friends of friends, to help with a little bit of fieldwork.

"We've known for a really long time that there are more species in the tropics than there are in polar regions," says Will Petry, a biologist with the Swiss Federal Institute of Technology who was on the research team. "But we don't have as good of an idea of the geography of interactions between species."

That's why Petry was eager to be a part of the study. He was doing research in California when the fake caterpillars arrived in the mail. He glued them onto plants, including cacti, then waited a few days. Then he carefully placed them into individual tubes, to preserve any bite marks in the plasticine clay, and mailed them back to the lab in Helsinki, Finland.

Phyllis Coley, a biologist at the University of Utah who was not part of the research team, told NPR that she'd seen the study: "I think it is great."

She says this global and controlled study strongly supports higher predation on caterpillars at lower latitudes and elevation.

Petry notes that "there are some migratory butterfly species, like the monarch. And one reason that they might migrate could be to avoid predators."

What's more, scientists can now look to see whether caterpillars tend to focus their defenses on insects, rather than on mammals or birds.

Nichols also got a box full of the fake critters, and colleagues helped her glue them on leaves at her research sites in Brazil.

All in all, nearly 3,000 dummy caterpillars were deployed in 31 sites from the Arctic Circle to southern Australia.

It turned out that not only was the risk of predation less at the poles, but also the risk decreased at higher elevations. "If you go up a mountain slope at the equator, you would find the same type of gradient — a decrease in the risk of getting eaten," Roslin says.

The pattern was driven by small predators like ants rather than by birds or mammals. "It's actually reinforced the idea that insects are far more important," says Yves Basset, at the Smithsonian Tropical Research Institute in Panama.

He notes that in addition to predators that might eat them, caterpillars are plagued by parasitizing wasps that wouldn't be detected by this study, and he thought that might muddy the predation pattern. "I was expecting this kind of result. I wasn't thinking it would be so clear," Basset says. "So this was a welcome surprise."