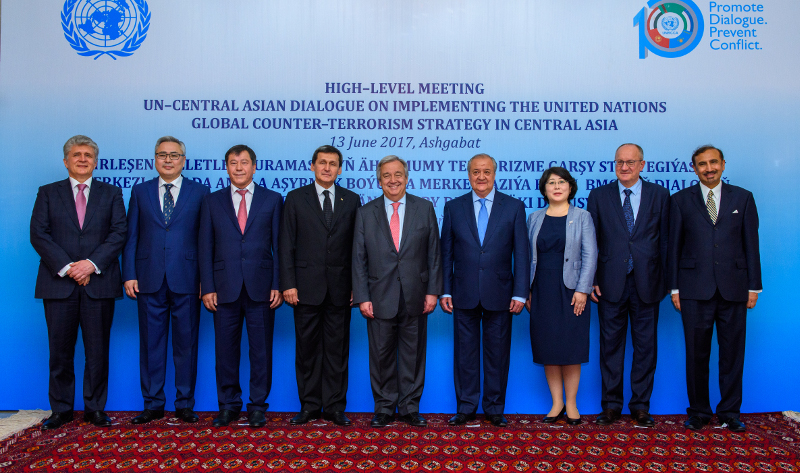 The participants reviewed the implementation of the Joint Plan of Action for the United Nations Global Counter-Terrorism Strategy in Central Asia at a regional level. The meeting discussed the tasks of enhancing stability and security and the ways of tackling them.

The authoritative organizations, together with the states, bear political and legal responsibility for maintaining peace and security, and occupy a special role in the process. Reflecting the countries’ interests in creating an effective system of cooperation in counteracting organized crime and terrorism, harmonizing their attitudes in this important area, optimizing national and international laws, the United Nations puts the issue on the agenda.

Recognizing the fundamental character of the UN Convections on counter-terrorism and the importance of fulfilling international legal commitments, the states are working out special programs to observe them. The following practical steps are worth mentioning: the adoption of national laws in this field, working out of relevant regional agreements, setting up of task groups, and building up of close contacts with specialized agencies.

Speaking of the significance of the meeting, members of the delegations have expressed confidence that the high-level dialogue will lend political impetus to the Central Asian countries towards adopting a much-needed mutually complimentary and well-coordinated strategic approach to counter-terrorism. Combined efforts of the region’s countries and their concerted approach to tackling the pressing issues will allow finding the most efficient ways to resolve them.

Looking at the main aspects of the global counter-terrorism strategy, speakers have noted that the United Nations Counter-Terrorism Implementation Task Force was set up to ensure coordination of the UN activities in this field. The Office coordinates CTITF membership, which is granted to 36 organizations within the United Nations, the World Customs Organization and the Interpol. The United Nations Counter-Terrorism Center (UNCCT), established in 2011 within the CTITF, provides assistance to the member-countries in enhancing potential for the Strategy implementation.

Speaking of the role of the United Nations Regional Center for Preventive Diplomacy for Central Asia in Ashgabat, speakers noted with satisfaction that its activities are aimed at strengthening regional cooperation and opening a productive dialogue on the peaceful, consensus settlement of incipient problems. Regular multi-lateral meetings attended by delegations of all Central Asian countries enable to focus attention on common concerns, which include the most important ones, such as preventive diplomacy as a key instrument for positive results in ensuring global security and stability, cross-border crime control, and others.

Together with the UN Counter-Terrorism Implementation Task Force and the EU, the United Nations Regional Center for Preventive Diplomacy for Central Asia has completed a project on executing the above-said UN Strategy in Central Asia. At a high-level Ashgabat meeting on November 30, 2011, co-organized by the Government of Turkmenistan, the CTITF, the EU and the UNCPDCA, the countries adopted the Ashgabat Final Declaration and the Joint Plan of Action for the Implementation of the United Nations Global Counter-Terrorism Strategy. The Plan of Action was the first document of its kind. In recent years, projects aimed to perform activities envisaged by the Plan have been carried out.

Welcoming the adoption of the Ashgabat Declaration on Combating Terrorism by the Central Asian countries, their constant efforts to implement the United Nations Global Counter-Terrorism Strategy, and its Joint Plan of Action in Central Asia, the UN Secretary- General has highlighted the importance of the Joint Declaration on Strengthening Regional Anti-Terrorism Cooperation (adopted today). “No country can defeat terrorism alone,” Mr. Antonio Gutteres said.