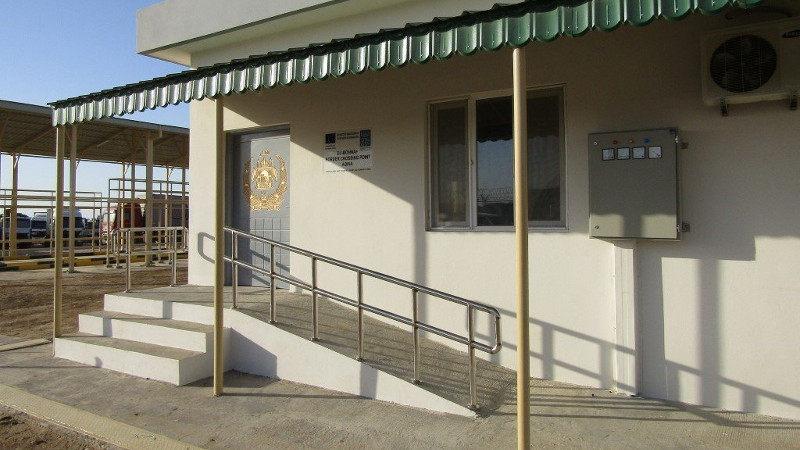 AKIPRESS.COM - The UNDP’s EU-BOMNAF Project recently completed construction of a new facility for passport control, registration, customs inspection, and vehicle search as part of an upgrade project of the Border Crossing Point (BCP) at Aqina, in Faryab Province, northwest Afghanistan, on the Afghanistan-Turkmenistan border, the UNDP said in press release.

The facility includes public toilet and shower rooms for male and female, and fencing around 180,000 square metres of enclosed area to improve security.

In 2015, BOMNAF project staff visited the area as part of a feasibility study and needs assessment mission. It was noted back then that, in order to conduct border crossing formalities and checks, the Afghan Border Police (ABP) were using a primitive self-built building, which lacked necessary conditions for the job. Therefore, at the beneficiaries’ request, BOMNAF included upgrade of BCP Aqina into its construction priority list and initiated construction works in late 2016.

The same year, the Presidents of Turkmenistan and Afghanistan officially opened the Turkmen-Afghan Railway, which passes through BCP Aqina, which is on an important import-export route for Turkmenistan and Afghanistan national businesses as well as local small scale cross-border trading; it is also known as a major supply route for fuel and agricultural products across the region.

Hundreds of trucks and railway wagons cross this BCP each week, carrying onions, potatoes, sesame seeds, nuts and pomegranates from Afghanistan to Turkmenistan and bringing in different types of fuel from Turkmenistan to Afghanistan.