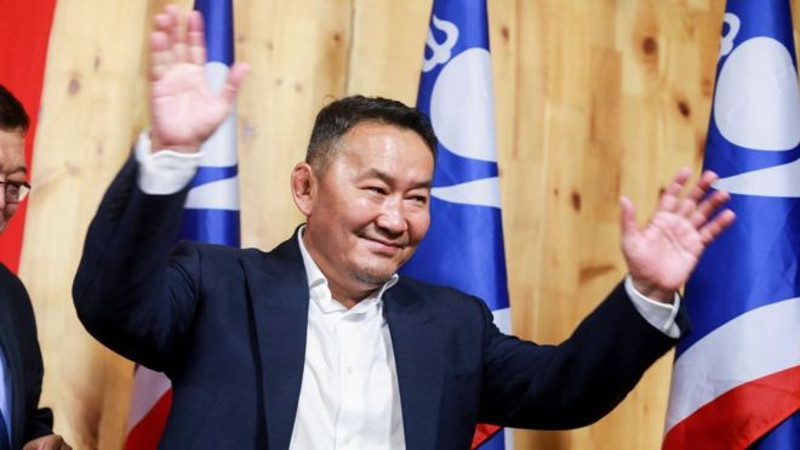 Khaltmaa Battulga had 50.7% of the vote with 87% of votes counted, the election commission said.

The 54-year-old candidate for the opposition Democratic party is a real estate tycoon and former Mongolian wrestling star.

Among his business interests are a hotel, food industries, and a Genghis Khan-themed amusement park.

"Mongolia has won," Mr Battulga said. "I will start work straight away to resolve the economic difficulties and make Mongolians debt free as I promised."

Among the president-elect's campaign promises was a drive to make more of Mongolia's mining wealth and deal with the country's debt - along with the personal debt of ordinary Mongolians.

A mining boom in 2011 propelled the country to the world's fastest-growing economy, with GDP surging by 17.5%.

But its fortunes rapidly reversed - in August last year the collapse of commodity prices made Mongolia's tugrik the world's worst-performing currency.

While the election's formal results were due to be announced later on Saturday, Mr Battulga's opponent Mieygombo Enkhbold trailed with some 41% of votes.

At least 100,000 blank votes were cast in protest over the choice of candidates, Reuters news agency reported.

Mr Battulga now faces the challenge of a parliament dominated by this political opponents, the Mongolian People's Party.

The sparsely-populated country between China and Russia is also facing economic troubles.

In May, the International Monetary Fund (IMF) handed over a $5.5bn (£4.3bn) bailout to the country amid slow trade with China and a fall in the price of its exports.