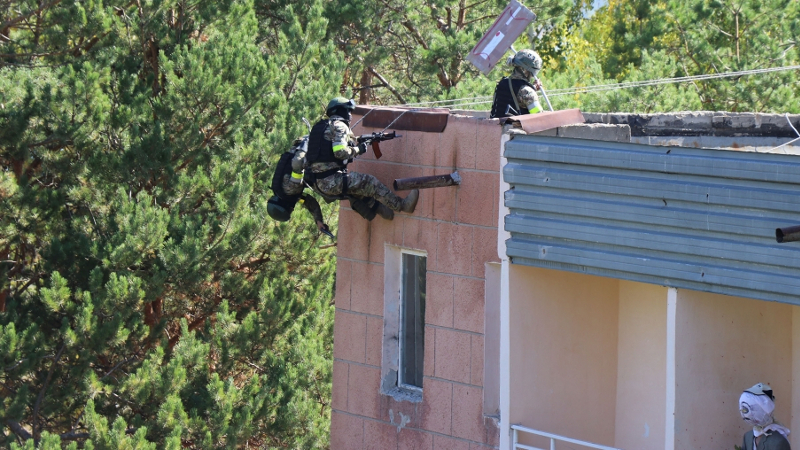 AKIPRESS.COM - The OSCE Programme Office in Bishkek supported a one-day command-staff exercise “Issyk-Kul Anti-terror - 2017”, on September 16, conducted by the Anti-Terrorism Centre of the National Security Committee of Kyrgyzstan, in cooperation with the General Staff of the Armed Forces of Kyrgyzstan, the Interior Ministry, the Emergency Situations Ministry and local self-government bodies.

The aim of the exercise was to simulate different stages of a possible hostage rescue operation – detection of terrorists, negotiation process, rescue and debriefing of hostages, and destruction of improvised explosive devices. The exercise also demonstrated the operation of headquarters, which guided the simulated anti-terrorist operation and managed the coordination between key security, military, and law-enforcement agencies as well checking the state of the agencies’ operational readiness to counter terrorist attacks.

“The OSCE Programme Office in Bishkek, in close cooperation with the Anti-Terrorism Centre of Kyrgyzstan and other state agencies, regularly supports Kyrgyz Governments efforts to counter terrorism, violent extremism and radicalization,” said Valeriu Chiveri, Deputy Head of the OSCE Programme Office in Bishkek. “Countering terrorism is impossible without the consolidated efforts of all state and local bodies and the strengthening of multilateral cooperation, including early warning mechanisms and proper responses to terrorist attacks.”

The OSCE Programme Office provides expert and technical assistance through its long-established partnerships with security sector institutions and support to inter-agency cooperation in improving responses to terrorist incidents.

The Office works closely with the Antiterrorism Centre of the State Committee, conducting regular command-staff exercises since 2013, building the capacity of staff members and enhancing facilities. Recently, the Programme Office handed over specialized Explosive Ordnance Disposal equipment to the specialists of the Kyrgyz  National Security Committee to enhance technical capacities, operational flexibility and the security of the State Committee explosive ordnance disposal specialists.