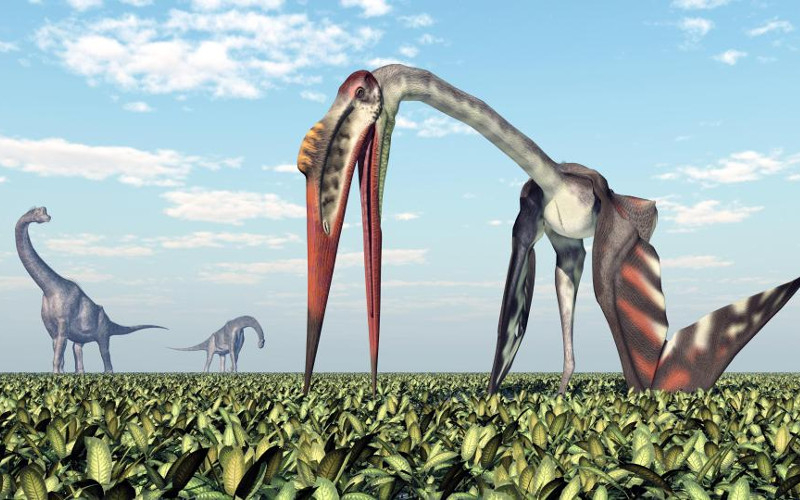 Computer generated 3D illustration of a Brachiosaurus and the pterosaur Quetzalcoatlus /Image: Getty

AKIPRESS.COM - The fragmentary fossil of a truly enormous pterosaur has been found in the Gobi Desert of Mongolia, National Geographic said.

This formidable predator may have had a wingspan of 36 feet—close to the size a small aircraft and rivalling the largest winged reptiles known from Europe and North America.

The newly found giant lived 70 million years ago in a warm, inland habitat that was arid but not quite as dry as today. This late Cretaceous landscape was replete with dinosaurs, and their babies might have made ideal food for the huge carnivore, which could walk well on all fours and probably stalked its prey on the ground.

Part of a mysterious group known as the azhdarchids, the animal was probably one of the largest pterosaurs that ever lived, say the authors of a new report detailing the discovery in the Journal of Vertebrate Paleontology.

The team compares the creature to the two largest pterosaurs currently known: Quetzalcoatlus, found in Texas in the 1970s, and Hatzegopteryx, a stockier azhdarchid with a shorter neck found in Romania in the 1990s. (Also read about a cat-size pterosaur that stalked the late Cretaceous.)

Both of these pterosaurs had estimated wingspans of 32 to 36 feet. On the ground, they may have stood 18 feet high—about as tall as a large bull giraffe. There’s even a chance that the newfound animal was larger than these previously known winged behemoths, says Mark Witton, an expert on pterosaurs at the University of Portsmouth in the U.K.

The team has not yet named the Mongolian fossil as a new species, as its remains are so incomplete. But it does represent the first pterosaur of its size found in this part of the world.

“Although fragmentary, the specimen is from a gigantic individual … extending the geographic range of gigantic pterosaurs to Asia,” the scientists write.