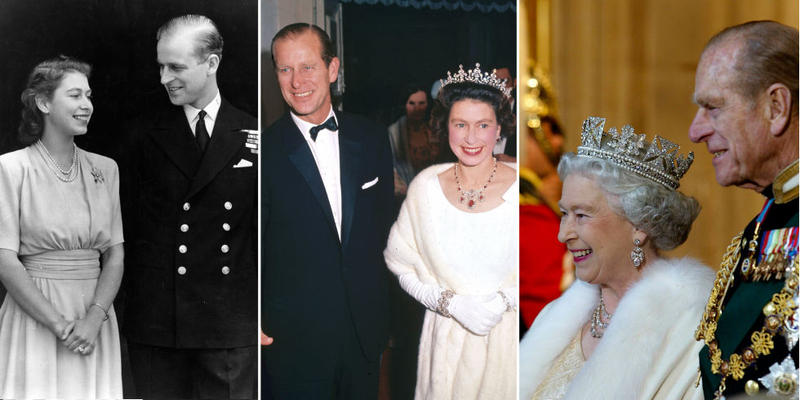 Queen Elizabeth II and Prince Philip through the years

AKIPRESS.COM - Queen Elizabeth and husband Prince Philip mark their platinum wedding anniversary with a small family get-together on Monday, a far cry from the pomp and celebration which greeted their marriage 70 years ago, Reuters reported.


The couple married at London’s Westminster Abbey on Nov. 20, 1947, just two years after the end of World War Two, in a glittering ceremony which attracted statesmen and royalty from around the world and huge crowds of cheering well-wishers.

Seventy years on, no public events are planned. Elizabeth, now 91, and her 96-year-old husband, who retired from active public life in August, will celebrate the milestone with a private party at Windsor Castle, the monarch’s home to the west of London.

That contrasts with their silver, golden and diamond wedding anniversaries when they attended thanksgiving services at the thousand-year-old Abbey, where the queen was crowned and where her grandson and his wife, William and Kate, were married in 2011.

However, the Abbey itself will mark the occasion with a full peal of its bells involving 5,070 change of sequences, with the 70 reflecting the anniversary, which will last more than three hours.

“Congratulations to The Queen and The Duke of Edinburgh as they celebrate their Platinum Wedding anniversary,” Prime Minister Theresa May said on Twitter. “They have devoted their lives to the service of the UK and the Commonwealth - my best wishes to them both on this special occasion.”

The wedding of Princess Elizabeth, as she then was, to the dashing naval officer Philip Mountbatten was seen as raising the nation’s spirits amid an austere background of rationing and shortages that followed the war.

“Millions will welcome this joyous event as a flash of colour on the hard road we have to travel,” said former Prime Minister Winston Churchill.