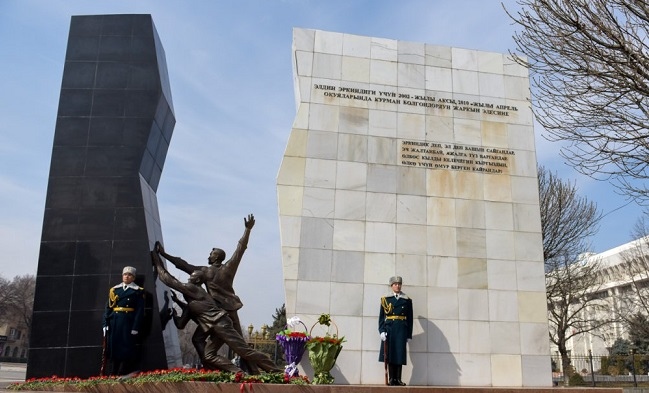 Memorial to victims of Aksy events

AKIPRESS.COM - President of Kyrgyzstan Sooronbai Jeenbekov released a message to the people on the occasion of the anniversary of the Aksy events that took place on March 17, 2002.

"Aksy events are of profound historical significance in the development of our state," he noted.

"Dozens of our compatriots sacrificed their lives for the freedom and independence of the country. The Aksy events of March 17, 2002 take special place in the glorious history of our country. Low bow to the heroes of the Aksy events!" the message said adding that their names will never be forgotten.

"Their feat will always remind us that we must cherish peace in our country, stability and harmony in society," the statement added.

On March 17, 2002, several villagers from Aksy district of Jalal-Abad region were killed in shooting during a protest action against the transfer of about 90,000 hectares of land to China. The victims were posthumously awarded with the medal "Erdik" (courage). The Aksy events also prompted wider mass opposition protests across Kyrgyzstan and Bishkek. The crisis in Aksy resulted in the resignation of then Prime Minister Kurmanbek Bakiyev and ultimately undermined the credibility of then President Askar Akayev.