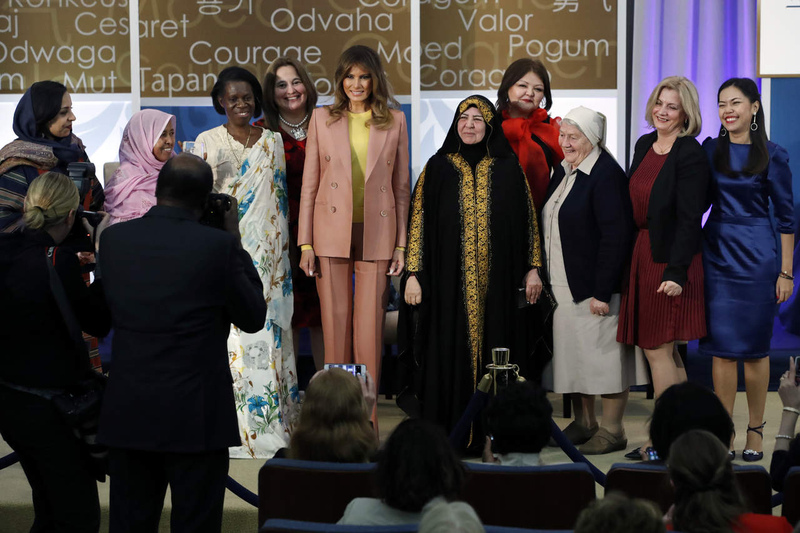 AKIPRESS.COM - First lady Melania Trump shared a stage Friday at the State Department with nine women who have battled slavery, stood up against terrorists and investigated sexual abusers in their home countries, Washington Post reported.

Trump presented glass awards to the recipients of the International Women of Courage Awards, saying they “define what it means to be a role model.”

Trump spoke of the bravery and resilience of the women seated to her side. In one of the few references to herself, Trump said she had focused her efforts as first lady on helping children.

Aiman Umarova, a lawyer in Kazakhstan, represents political prisoners and helps bring to justice those involved in the sexual abuse of women and children.

Aliyah Khalaf Saleh of Iraq had rescued young military cadets ambushed by Islamic State militants, and helped recruits to the extremist group get fake identity cards so they could escape.

L’Malouma Said of Mauritania was born into slavery and has become an anti-slavery activist elected to parliament.

Sirikan Charoensiri, a Thai lawyer, helped found a human rights group that documents human rights abuses under the military government that came to power in a 2014 coup. She has been charged with sedition for her work.

The other honorees came from Afghanistan, Honduras, Italy, Kosovo and Rwanda. A 10th woman honored, from Guatemala, was unable to fly to Washington for health reasons. Among the guests were Callista Gingrich, the U.S. ambassador to the Vatican.