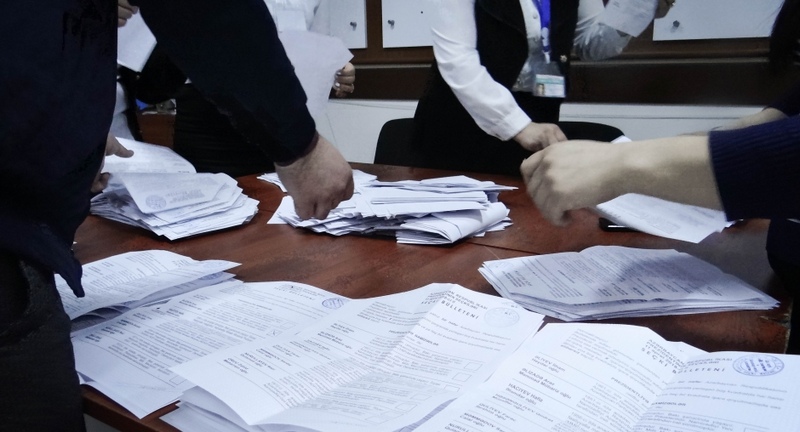 AKIPRESS.COM - The early presidential election in Azerbaijan took place within a restrictive political environment and under laws that curtail fundamental rights and freedoms, which are prerequisites for genuine democratic elections, OSCE said in a statement on April 12.

Against this backdrop and in the absence of pluralism, including in the media, the election lacked genuine competition. Other candidates refrained from directly challenging or criticizing the incumbent, and distinction was not made between his campaign and his official activities, the international observers concluded in a preliminary statement today. At the same time, the authorities were co-operative and international observers were able to operate freely in the pre-election period, and the election administration was well resourced and prepared the election efficiently.

On election day the observers reported widespread disregard for mandatory procedures, a lack of transparency, and numerous serious irregularities, including ballot box stuffing. More than half of the vote counts were assessed negatively, largely due to deliberate falsifications and an obvious disregard for procedures.

“We have noted the positive attitude displayed by the national authorities of Azerbaijan towards international election observation, as well as the professional work of the Central Election Commission in the pre-election period. We stand ready to continue our co-operation and turn it into a joint effort to tackle the fundamental problems that a restrictive political and legal environment, which does not allow for genuine competition, poses for free elections,” said Nilza de Sena, Special Co-ordinator and Leader of the short-term OSCE observation mission. “I encourage the authorities to take good note of the recommendations ODIHR will make in their final report. We will be ready to assist in this process, if requested by Azerbaijan, and to continue our dialogue on the future development of the country's democracy.”

The election took place in conditions dominated by the ruling New Azerbaijan Party (YAP), which nominated the incumbent president as one of the eight candidates who took part. Some opposition parties boycotted the election, citing a non-competitive environment, while others not participating said the early election date left them with insufficient time to do so meaningfully.

Overall, the campaign generated limited public engagement. The ruling party campaign in favour of the incumbent was well-organized and well-resourced, while the candidate did not campaign himself but made visits across the country and received many high-profile foreign dignitaries in his official capacity. The campaigns of the other seven candidates were limited and appeared hampered by a lack of regional structures and resources.

“We have to consider that, in a political environment where democratic principles are compromised and the rule of law is not observed, fair and free elections are not possible,” said Viorel Riceard Badea, Head of the delegation from the Parliamentary Assembly of the Council of Europe. “On election day we observed several irregularities, but there is no way to know how this affected the outcome of the election.”

Highly restrictive laws related to the media challenge the freedoms of expression and the press, and extend also to website and social media content. Defamation is a criminal offense, punishable by imprisonment and with additional penalties for defamation of the president, further limiting the freedom of expression key to political campaigning, the observers said. The largest part of the political coverage in media outlets monitored was of the incumbent in his official capacity, while all other candidates combined received only a fraction of the time. As required by law, the public broadcaster allocated free airtime to candidates, although only through roundtable discussions on television and radio.

“A few weeks of campaigning during which candidates could present their views on television cannot make up for years during which restrictions on freedom of expression have stifled political debate,” said Margareta Kiener Nellen, Head of the delegation from the OSCE Parliamentary Assembly. “The OSCE Parliamentary Assembly will certainly continue to support all steps by the authorities that will bring the country forward on a path towards creating the open political environment necessary for truly free and fair elections.”

“Fundamental rights and freedoms, which are pre-requisites for genuine democratic elections, are severely restricted in practice,” said Corien Jonker, Head of the Election Observation Mission from the OSCE Office for Democratic Institutions and Human Rights. “The authorities should deliver on Azerbaijan’s commitment as an OSCE participating State to respect, protect and support the democratic rights of its citizens.”

The election administration at all levels appeared highly organized and well-resourced but, due to the lack of political differentiation between the three groups in parliament that nominate commissioners, there is no guarantee the administration is impartial, the observers said. The Central Election Commission held regular public sessions at which no dissenting or argumentative opinions were stated, and the majority of members did not engage in any discussions.

The CEC denied registration to two nominees after ruling a considerable number of the supporting signatures they submitted as duplicate or invalid, leaving them short of the total required. The CEC working group responsible for the verification of signatures was unable to clearly demonstrate the process was technically adequate and accountable. There is no legal provision for nominees to address errors or shortcomings identified by the CEC in relation to the signatures.

The CEC reported registering a total of 58,175 domestic observers, including 4,041 accredited by NGOs, while a number of the international observers’ interlocutors maintained that obstacles introduced by the government and the election administration limit the ability of civil-society organizations to operate. One such organization remains unregistered since 2008, and its volunteers had to accredit themselves individually, some of them facing difficulties.

This was the first presidential election since constitutional amendments in 2016 further increasing the powers of the president. A number of constitutionally guaranteed fundamental rights and freedoms related to elections are subject in practice to legal and administrative restrictions. The Election Code is detailed and well-structured. Although a few previous ODIHR recommendations in this area have been taken into account, none of the priority recommendations by ODIHR and Venice Commission were addressed.