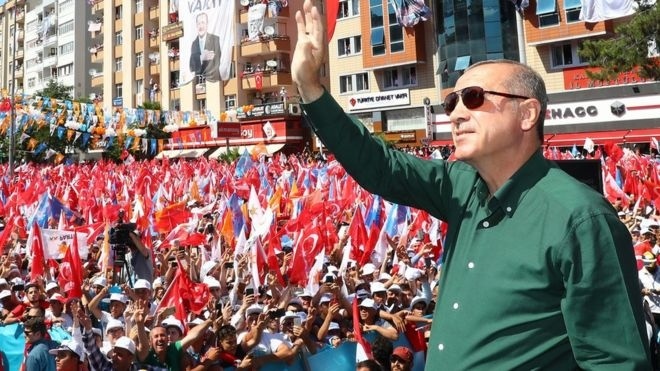 Sadi Guven said the president "received the absolute majority of all valid votes", but gave no further details.

State media reports put Mr Erdogan on 53% with 99% of votes counted, and his closest rival Muharrem Ince on 31%.

The opposition is yet to officially concede but said it would continue its democratic fight "whatever the result".

It had earlier cast doubt on results being broadcast by state media. Final results will be announced on Friday.

The polls were the most fiercely-fought in many years, and Mr Erdogan is set to assume sweeping powers under a new executive presidency.

The 64-year-old gave a triumphant victory speech from the balcony of his party's headquarters in the capital Ankara at 03:00 (00:00 GMT), declaring: "The winner of this election is each and every individual among my 81 million citizens."