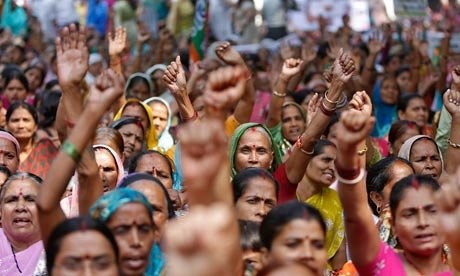 AKIPRESS.COM - A survey conducted by the Thomson Reuters Foundation has ranked India as the world's most dangerous country for women, ahead of Afghanistan, Syria and Saudi Arabia. But is this really true?

The poll surveyed 548 experts on six different indices - healthcare, discrimination, cultural traditions, sexual and non-sexual violence, and human trafficking. They were first asked to name the five most dangerous countries from the list of 193 United Nations member states. And then they were asked to name the worst country in each of the above categories. India topped three - cultural traditions, sexual violence and human trafficking.

A similar poll seven years ago had ranked India fourth, with Afghanistan top of the list, BBC reported.

The new survey has been criticised in India, with many questioning how countries like Saudi Arabia and Afghanistan, which grant far fewer rights to women, managed to perform better.

The country's National Commission for Women rejected it outright, saying that countries where women could not speak out had done better. They also pointed out that rape, harassment and other forms of violence against women appear to have risen in India because more cases are being reported, driven by public outrage.

The Ministry of Women and Child Development said in a statement that using "an opinion poll to peg India as the most dangerous country for women is clearly an effort to malign the nation and draw attention away from real improvements seen in recent years".

The report relies completely on the opinion and verdict of the 548 experts. They include academics, policymakers, journalists and those working in healthcare or other development sectors. The foundation's head, Monique Villa, told BBC World Service that 41 of the experts were Indian. However there is no clarity about the nationality of the other experts and how widely other countries were represented. Furthermore, the report states that of 759 experts contacted, only 548 replied - no other information about them is available.

Sanjay Kumar, director of the Centre for the Study of Developing Societies (CSDS), one of India's top independent research organisations, said this "lack of transparency" was extremely worrying. "How were these people chosen? What is the gender divide? Where are they from? This is very important to know, but there is no information available on it," he said.

But Roop Rekha Verma, a college professor and social activist, welcomed the report.

"I am not unhappy about this report and its findings - it is enough to make us sit up," she said. "A better methodology, rooted in intensive data and empirical work, could have been used of course, but if more than 500 gender specialists view it like this, it has to be taken seriously. These aren't perceptions from people on the street - these are well-informed experts."