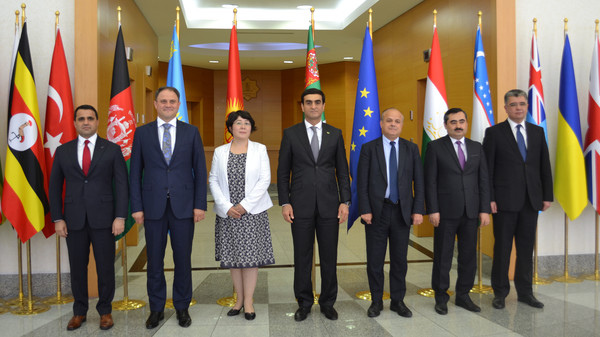 AKIPRESS.COM - The fifth round of the High-level Political and Security Dialogue between the European Union and the countries of Central Asia (Kazakhstan, the Kyrgyz Republic, Tajikistan, Turkmenistan and Uzbekistan) took place on 9 July 2018 in Ashgabat, Turkmenistan. Afghanistan was invited to take part in the Dialogue as a special guest.

The annual meetings of the High-level Dialogue provide an opportunity to exchange views and intensify cooperation on a broad spectrum of regional developments in and around Central Asia, with a particular focus on security.

This year's meeting took place at a time of significant changes in Central Asia, including important domestic reform processes and positive momentum in regional cooperation illustrated by the informal Summit of Central Asian leaders held on 15 March in Astana, Kazakhstan. Participants in the Dialogue agreed that the new regional dynamics had created further opportunities for cooperation between the EU, Central Asia and Afghanistan. The EU presented the main orientations of its new Strategy on Central Asia, foreseen to be adopted in 2019.

Following the International Conference on Water for Sustainable Development, which European Commissioner for Development Neven Mimica attended on 20-22 June in Dushanbe, participants in the High-level Dialogue discussed prospects for regional cooperation in the management of water resources and the environment given their wide-ranging implications for security, confidence-building and crisis prevention. Participants agreed on the importance of the upcoming Summit of the International Fund for Saving the Aral Sea (IFAS) in August in Ashgabat, as well as the International Donors' Conference on Nuclear Remediation in Central Asia which will take place on 8 November 2018 in London.

Participants also discussed counterterrorism and the prevention of violent extremism, following the High-level International Conference on Countering Terrorism and Preventing Violent Extremism, which took place on 3-4 May in Dushanbe, as well as the Conference on the Role of Youth in Preventing and Countering Violent Extremism and Radicalisation that Lead to Terrorism, held on 11-12 June in Tashkent. They exchanged views on recent developments in illegal drug trafficking and border management, including possibilities for reinforced cooperation in these areas.

The Dialogue also provided an opportunity to exchange views on the development of regional connectivity. The EU presented the main orientations of the forthcoming EU Strategy on Euro-Asian connectivity and stressed the importance for sustainable connectivity to generate equitable and balanced growth, more resilient societies, stronger regional cooperation and a rules-based global order.

Building upon the outcome of the Tashkent Conference on Afghanistan: Peace Process, Security Cooperation and Regional Connectivity, participants praised the readiness of Central Asian states to play an active role in the promotion of peace and development in Afghanistan. They discussed possibilities to extend relevant aspects of EU-Central Asia cooperation to Afghanistan.

Participants looked forward to the next EU-Central Asia Ministerial meeting to take place later this year in Brussels.

The meeting was hosted by the Deputy Foreign Minister of Turkmenistan, Mr Vepa Khadjiev, and chaired by Mr Jean-Christophe Belliard, Deputy Secretary General for Political Affairs of the European External Action Service.