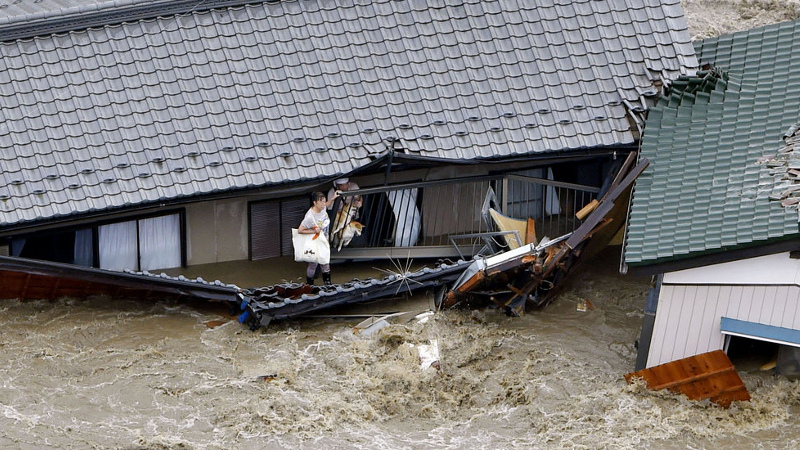 AKIPRESS.COM - Volunteers and rescue workers in Japan have shoveled through mud and debris hoping to rescue people still missing in the wake of devastating floods that killed at least 200 people, Aljazeerareports.

The torrential rains, which left tens of thousands without water and electricity, hit central and western Japan last week and forced two million residents across 29 prefectures to flee their homes.

Search efforts, hampered by high temperature, entered their fifth day on Thursday and more than 7,000 evacuees spent the night in temporary shelters and on the floors of school gymnasiums.

"The critical 72 hours have passed," Mutsunari Imawaka, an official with Okayama prefecture, one of the worst-hit regions, told AFP news agency.

"But we will continue our search believing there are still survivors."

Residents are worried that reconstruction efforts could be prolonged.

In Hiroshima, Okayama and Ehime, the prefectures hardest hit by the torrential rains, nearly 240,000 households are still without water. Paired with high temperatures, this is causing health concerns in the affected areas, many of which have an ageing population.

There have been reported cases of dehydration, insomnia and loss of appetite among survivors, particularly elders, as they work to clean their houses damaged by the worst floods in nearly four decades.

Water shortage at local hospitals has forced some dialysis patients to be transferred to other hospitals and surgeries to be postponed.

Television footage showed one elderly woman trying to sleep by kneeling across a folding chair, arms over her eyes to keep out the light.

Tight water supplies meant that people were not getting enough fluids, authorities said.

"Without water, we can't really clean anything up. We can't wash anything," one man told NHK television.

"The affected areas are in dire need of rescuers and financial assistance," Junji Ide, chief director of Lohas Minami Aso Tasukeai, an NGO of volunteers, told Al Jazeera from Saka in Hiroshima.

"We need all the help we can get. The situation is quite severe. In Saka, there are still 10 people missing.

"The municipalities and volunteer centres are playing catch-up. They weren't prepared for all of this. There is still not enough resources and funding to help everyone out. We need more resources here."

In the Ehime prefecture, famous for its mandarin oranges, local farms and orchards built on mountain slopes have been destroyed by the landslides resulting from the torrential downpour.

"We probably won't have any mandarins this year," Kichisaburo Hiraishi, a 69-year-old farmer, told Asahi Shimbun. "Perhaps we have to give up farming altogether."