AKIPRESS.COM - A stash of 2,800-year-old gold jewellery has been unearthed by archaeologists in Kazakhstan, MailOnline  reports.

Some 3,000 golden and precious items were found in a burial mound in the remote Tarbagatai mountains.

The treasure trove - described as 'priceless' - is believed to belong to royal or elite members of the Saka people who held sway in Central Asia eight centuries before the birth of Christ.

Among the finds are earrings in the shape of bells, gold plates with rivets, plaques, chains, and a necklace with precious stones.

Gold beads decorating clothes were made with the use of sophisticated micro-soldering techniques, indicating an exceptional level of development jewellery-making skills for the period.

Archeologists expect to find the remains of the prestigious couple, the owners of the glittering treasures - but they have not yet dug open their graves.

Professor Zainolla Samashev, in charge of the excavations, said: "A large number of valuable finds in this burial mound let us believe a man and a woman are buried here - the reigning persons or people who belonged to the elite of Saka society."

Head of the East-Kazakhstan region Danial Akhmetov said: "This find gives us a completely different view of the history of our people."

The ancient people clearly had exceptional skills in mining, or extraction, selling and jewellery making, he said.

"We are the heirs of the great people and great technologies," he said.

There are some 200 burial mounds on the Eleke Sazy plateau where these treasures were found but many were robbed in ancient times. 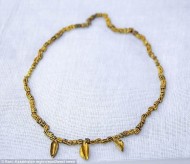 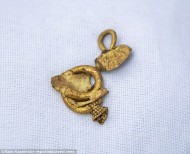 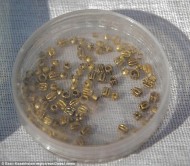