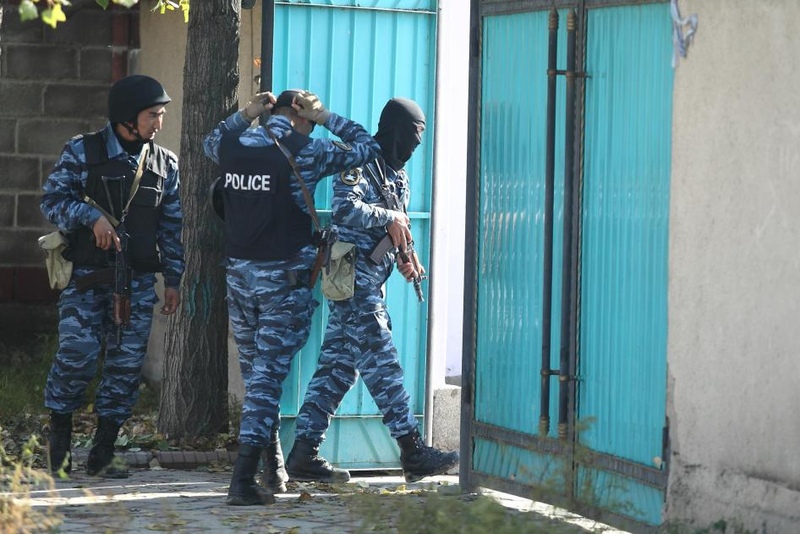 Counterterrorism police carry out a search in Bishkek, Kyrgyzstan on October 16, 2015. © 2016 Ulan Asanaliev/RFE/RL

AKIPRESS.COM - Kyrgyzstan is convicting hundreds of people for possessing videos, pamphlets, and books that it has banned using a dangerously overbroad definition of extremism, Human Rights Watch said in a report released September 17. Offenders are sentenced to 3 to 10 years in prison even if they did not distribute the material or use it to incite violence.

The 78-page report, “‘We Live in Constant Fear’: Possession of Extremist Material in Kyrgyzstan,” finds that in some cases, suspects are charged for possessing material that the authorities classified as extremist only after their arrests. Several suspects told Human Rights Watch that police and security agents had planted the material during searches, then demanded payoffs to end investigations. Some said law enforcement officials tortured them to extract confessions.

“Kyrgyzstan should prosecute people for committing or plotting violence, but not for the videos they watch or the books they read,” said Letta Tayler, senior terrorism and counterterrorism researcher at Human Rights Watch and the report’s author. “Outlawing mere possession of material vaguely defined as extremist makes it all too easy to unjustly target political opponents, activists, journalists, defense lawyers, and ordinary citizens.”

Human Rights Watch interviewed 70 people for the report, most during two visits to Kyrgyzstan, in 2017 and 2018. They included 11 people accused or convicted in these cases, family members of 13 suspects, 17 local human rights defenders and lawyers, and government officials. Human Rights Watch also reviewed 34 court cases and other government documents.

In many cases, the material used in prosecutions did not contain explicit calls for violence, Human Rights Watch found. However, some of the material consisted of recruitment videos or other propaganda for Islamist armed groups. Much of it was from Hizb ut-Tahrir, a pan-national group banned in Kyrgyzstan that calls for an Islamic caliphate but publicly disavows violence.

The prosecutions are part of a broader crackdown in Kyrgyzstan and other Central Asian countries in the name of countering Islamist extremism. Nationals from the region and its diaspora have been implicated in seven attacks by groups such as the Islamic State (also known as ISIS) from June 2016 to July 2018. The attacks killed at least 117 people and injured more than 360.

Prosecutions for possessing extremist material in Kyrgyzstan are carried out under article 299-2 of the criminal code, the country’s most widely applied charge against terrorism and extremism suspects. At least 258 people have been convicted under article 299-2 since 2010. According to the most recent data available, several hundred suspects are awaiting trial on the charge and the numbers have increased each year, with 167 new cases opened during the first nine months of 2016.

Since 2013, article 299-2 has criminalized possession of material deemed extremist even if the accused has no intent to disseminate it, making the measure a particularly severe threat to freedom of speech, belief, and expression. Parliament has approved amendments to restore an earlier requirement that possession of extremist material must be “for the purpose of dissemination” to be unlawful. However, government officials have suggested that the amendments may be delayed beyond their scheduled start date of January 2019. The authorities should put the amendments into effect as swiftly as possible.

The authorities in Kyrgyzstan should revamp article 299-2 and Kyrgyzstan’s overly broad definition of extremism. The country’s courts should promptly review all convictions for mere possession of extremist material, the Human Rights Watch stated.

“Abusive counterterrorism measures are not only unlawful, they can alienate local communities,” Tayler said. “Instead of keeping the public safer, they risk generating support for extremist armed groups.”