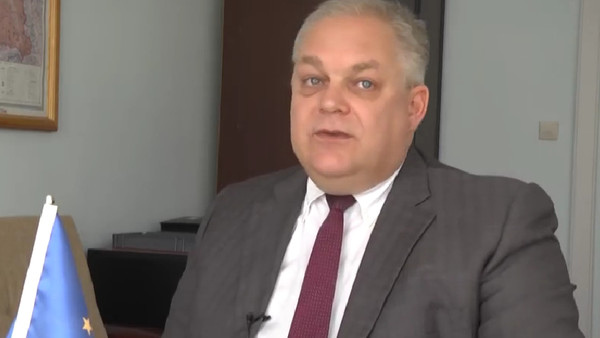 AKIPRESS.COM - Eduard Auer has been appointed as a new Head of Delegation of the European Union to the Kyrgyz Republic. On September 20, he met Minister of Foreign Affairs Erlan Abdyldaev to present the copies of credentials and commenced his duties, the EU Delegation said.

In particular, the Minister and the Ambassador discussed the ongoing political dialogue, including the ongoing negotiations on the Enhanced Partnership and Cooperation Agreement. Discussing development cooperation, both sides reconfirmed the interest in working closely to implement various projects in crucial sectors of cooperation – education, the rule of law and integrated rural development, including water.

They also spoke about regional developments and, in particular, the joint efforts to facilitate Central Asian regional cooperation in making the region stable, secure and prosperous. Ambassador Auer reconfirmed the strong interest of the EU to continue supporting the strengthening of democracy and human rights in the country.

After the meeting Ambassador Auer said: "I am delighted to start work in this beautiful country. The relations between the Kyrgyz Republic and the EU are close and wide-ranging. The EU is a trusted partner interested to work hand in hand with the authorities and the people of this country to strengthen these relations and to contribute to the development of the Kyrgyz Republic."

Ambassador Auer previously occupied the post of the Head of Division for Western Balkans at the European External Action Service in Brussels and prior to that he worked as the Head of EU Delegation to Tajikistan.