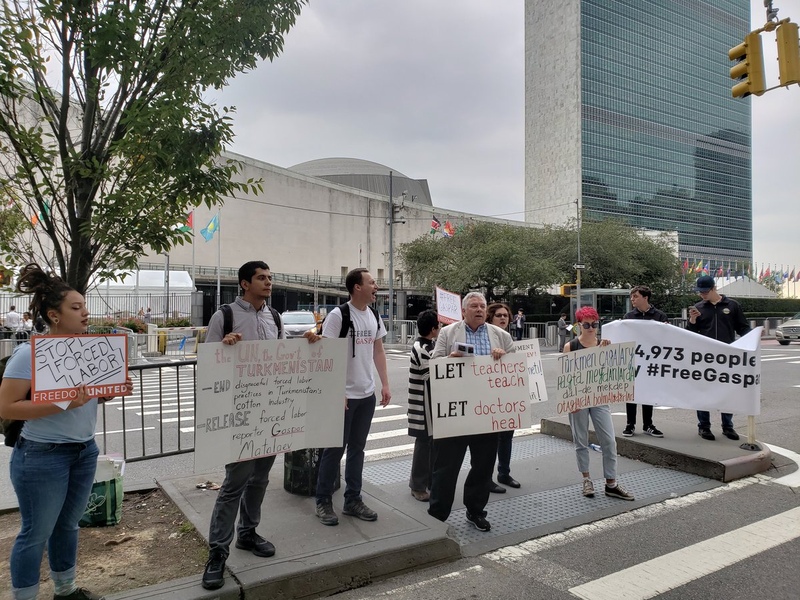 The demonstration was during Turkmen President Gurbanguly Berdimuhamedov’s first visit to the United States in three years.

Each year the government of Turkmenistan forces tens of thousands of workers from both public and private sectors to either pick cotton during the harvest season or to pay a bribe to their supervisors to hire a replacement worker to pick cotton instead, the cottoncampaign.org said.

This takes place under the threat of punishment, including public censure, loss of wages from their regular jobs, and termination of employment. The government treats refusal to contribute to the cotton harvest as insubordination, incitement to sabotage, and even “contempt of the homeland,” the report said.

The demonstration was a part of a campaign to stop forced labor of children and adults in Turkmenistan’s cotton sector led by the Cotton Campaign, which is calling on the United Nations Secretary General António Guterres to demonstrate a strong commitment to stop forced labor in Turkmenistan’s cotton sector and to demand the release of Gaspar Matalaev, as recommended by the United Nations Working Group on Arbitrary Detention.

In addition, 42 institutional investors, which manage $60 billion in assets, are encouraging global home goods and apparel brands and retailers to take action to address the grave human rights abuses in the cotton fields of Turkmenistan.