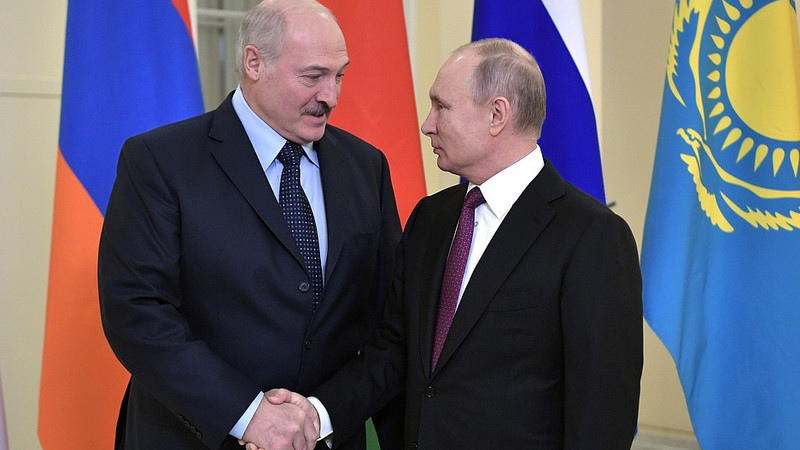 AKIPRESS.COM - Belarus President Alexander Lukashenko and President of Russia Vladimir Putin talked briefly about prices for energy resources as a session of the Supreme Eurasian Economic Council opened in St Petersburg on 6 December.

Alexander Lukashenko spoke about equality and equal rights in the Eurasian Economic Union.

The president said the price Belarus pays for Russian natural gas is heavily skewed. Gazprom charges nearly $3 per 1,000m3 per 100km for transporting natural gas from Yamal-Nenets Autonomous District all the way to the Belarusian border while the internal Russian tariff is about $1. Due to these circumstances natural gas at the border with Russia's Smolensk Oblast is priced at nearly $130 per 1,000m3 while the wholesale price for consumers in Smolensk Oblast is $70 or nearly half of what Belarus pays.

“A simple question: how are we supposed to compete in this situation?” wondered the Belarus president.

Belarus pays $129 per 1,000m3 of Russian natural gas and will pay $127 next year. Meanwhile, Germany pays $250. While the domestic price for natural gas in Russia is even lower, Vladimir Putin described the state of affairs as “a major advantage for our allies”.

“If Belarus didn't enjoy advantages of integration, if the price was determined by the market, the price would be $200 instead of $129 and $127,” Putin said.

Lukashenko doubted the statement and said that Belarus had been saddled with even worse conditions than Germany. “I've said it more than once already. We fought the war together while our WW2 veterans have to live with this situation,” he noted. The Belarusian head of state pointed out that Russian gas has to go a long way to reach Germany. “This is why they pay such a price,” said Alexander Lukashenko.

Vladimir Putin wanted to conclude the discussion in front of the media: “Let's talk about it later behind closed doors. But you are absolutely right that we need to put together a plan to reach the common market. We agree with that. And we are going to make it happen.”

Following the meeting, Lukashenko commented to reporters that he apologized for the debate.