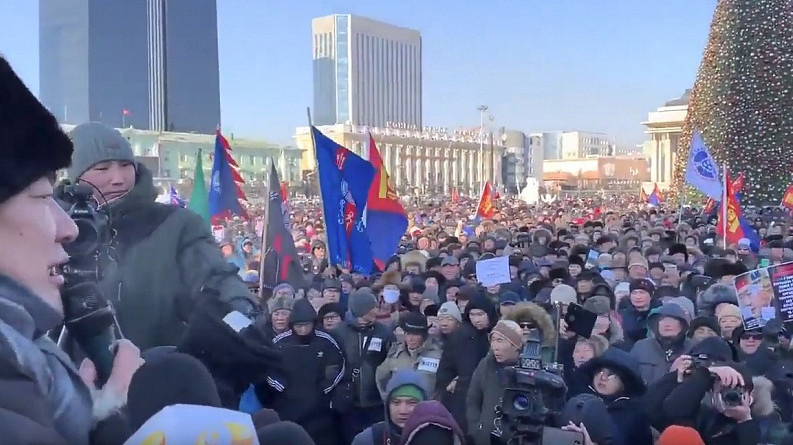 
The local news agencies describe today's mass protests as the second largest protests after the 2008 riot in Mongolia.

Crowd is protesting against members of the Mongolian People's Party (Mongol Ardiin Nam) and the Democratic Party (Ardchilsan Nam), together known by the abbreviation MANAN. The protesters say that these two parties have "rich officials who have managed to retain their posts for 27 years."

Current speaker of parliament Miyegombyn Enkhbold and the ex-president of Mongolia Tsakhiagiin Elbegdorj are members of these parties.

There has been rising anger over a long-running corruption case related to allegations that Enkhbold and other political figures had looked to raise 60 billion tugrik ($23 million) by selling off government positions.

Enkhbold has denied the allegations.

On 1 July 2008 a riot broke out in Ulaanbaatar, the Mongolian capital city. The riot was sparked by allegations of fraud surrounding the 2008 legislative election which occurred three days earlier. While initially a peaceful protest, the riot resulted in Mongolia's first state of emergency which lasted four days, and a military presence (lasting two of those days) was brought into the city to quell the riot. Five people were killed by the police, and the headquarters of the Mongolian People's Revolutionary Party (who had won the election) was set on fire. Additional suggested causes for the riot include a change to the electoral system which was not well understood, and an increased division between Mongolia's rich and poor population.