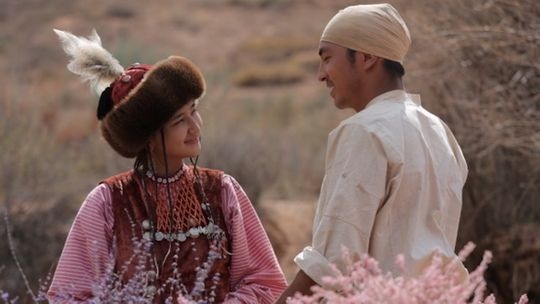 Over 250 films from 70 countries of the world were screened at the festival, many of which were previously shown at world film festivals.

“That’s the pipe dream of every filmmaker,” said Eleonora Granata, president of Melograno Films. “But we also want people to know that Kyrgyzstan is a very beautiful, remote and pristine country. That is also part of the message.”

Kyrgyzstan doesn't have a lot of money, Granata said, so, even with funding from a Russian producer, the director couldn't afford to attend the screening. Granata had to pay her own air fare and hotel accommodations. “I think we did the very right thing to come here because clearly there is an interest for film that is not classic or super-edgy. For our kind of film.”

“The Song of the Tree” is billed as the “first-ever folkloric musical from Kyrgyzstan.” It’s a story of forbidden love set in the Kyrgyz plains of the 1800s. A tribal chief doesn’t want his daughter to marry a handsome young man who he thinks is a scoundrel because he’s not an accomplished athlete or fighter. The young man runs away, but meets a mysterious nomad who teaches him to fight, setting up a subsequent encounter with the woman he loves and the men who have shamed him,  desertsun.com reported.

Related content
PM Abilgaziyev awards authors of The Song of the Tree musical
Kyrgyz Culture Minister receives 30 million soms for production of TV series on family and home country themes
First ever Kyrgyz musical Song of the Tree to premiere on Feb.28