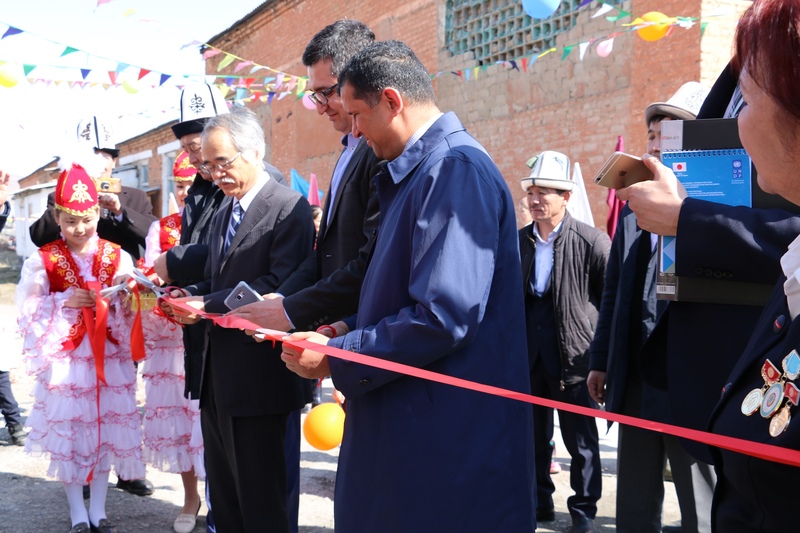 “Today, within the framework of the “Grass Roots and Human Security ”program in Kyrgyzstan, 146 projects have been implemented for a total of 9,966,306 (nine million nine hundred sixty-six thousand three hundred and six) US dollars,” says Extraordinary and Plenipotentiary Ambassador of Japan in the Kyrgyz Republic Mr. Yoshihiro Yamamura.

“This project is the result of cooperation of the Embassy of Japan in the Kyrgyz Republic, the Aga Khan Foundation and local authorities. I hope that the repaired kindergartens will have a positive impact on children’s life, as well as bring employment opportunities for teachers,” Mr. Yoshihiro Yamamura added.

These kindergartens required significant upgrades and renovations, to ensure adequate and safe places for children to learn and play. The lack of heating system in the three kindergartens even compelled its closure during wintertime. Now, with the infrastructure renovations and expanded classroom spaces — funded by the Government of Japan and implemented by the Public Foundation Kyrgyzstan Mountain Societies Development Support Programme (MSDSP KG), an Initiative of the Aga Khan Foundation — these kindergartens will not only be operational during the cold winter periods, but will also be able to accept more children. Parents in the Kara-Kulja region no longer need to worry about being waitlisted in their village kindergartens as the capacity of the region’s kindergartens has more than doubled from 150 to 320 children.

The repair work has also provided an opportunity for custodians and parents of the newly enrolled children to engage in income-generating activities. In addition, with increased enrollment, the kindergartens will employ 12 more staff. This initiative will improve income-generating opportunities for the communities of Kara-Kulja, and thereby lead to enhanced quality of life of families in the region.

The renovation was made possible by the Governments of Japan’s Grant Assistance of Grassroots Human Security Projects (GGP) within the framework of the project “Rehabilitation of preschool educational institutions in Kara-Kulja district, Osh region”, implemented by MSDSP KG.
The total amount spent on kindergartens’ repair works in the villages of Kara-Kulja, Kara-Kochkor and Zhide was USD 51,577.