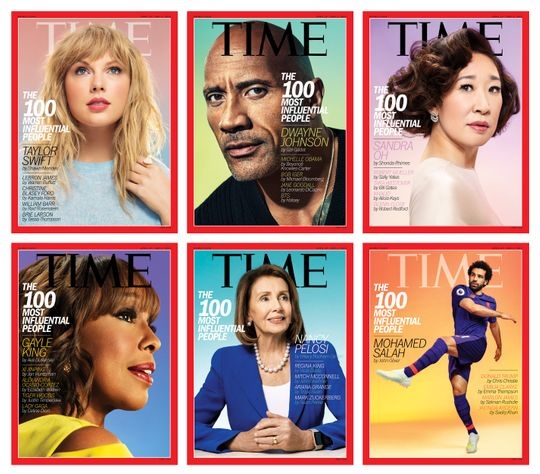 AKIPRESS.COM - Entertainers, an athlete, the speaker of the House of Representatives and journalist cover Time's issue honoring the "100 Most Influential People in the World.”

Dwayne Johnson, Taylor Swift, Sandra Oh, Gayle King, football star Mohamed Salah and Nancy Pelosi are depicted on the covers. Inside the issue, the newsmakers are written about by their colleagues, friends and other famous admirers, USA Today reports.

Gal Godot wrote of her "Red Notice" and "Fast and Furious" co-star, "There is no one in Hollywood quite like" the wrestler-turned-action star. She lauded his work ethic and praised him for establishing "an environment on set filled with warmth and positivity."

Singer Shawn Mendes, who profiled Swift, marveled, "Taylor makes anyone older feel young again and anyone young feel they can do anything. It’s so rare and so special. If there is one thing I want to achieve in my career and life, it’s that."

"Grey's Anatomy" creator Shonda Rhimes said it was a career highlight to write for Sandra Oh, who spent 10 years on the medical drama playing Dr. Cristina Yang before taking on a new Emmy-nominated lead role in "Killing Eve."

Oh, she wrote, "treats dialogue like notes of music – every word must be played, every syllable correctly toned."

Rhimes also recognized her as a trailblazer with regards to diversity on TV.

"With her nuanced characters, Sandra Oh has chosen to fearlessly take up space in a universe that has not always made space for her," the producer added. "Now, the power of her talented presence makes space for others."

Director Ava DuVernay expressed satisfaction that "CBS This Morning" anchor Gayle King is finally getting her due, thanks to high-profile interviews like her two-part R. Kelly exclusive in March.

"The fact that this year she is being lauded as one of the all-time great broadcast interviewers is simply the perfect signifier," the director wrote, albeit "a few decades overdue."

"Loving Michelle Obama wasn’t much of a choice," wrote the singer, who famously serenaded the Obamas at an inaugural ball in 2009, "It was something that came naturally."

Obama, Beyoncé wrote, "would’ve been impactful simply by being in the White House, the first African-American First Lady. But she also used her position of power to improve the world around her. She empowers all of us to interrogate our fears and surpass greatness."

See the covers in the gallery below. Time's full list is available online.