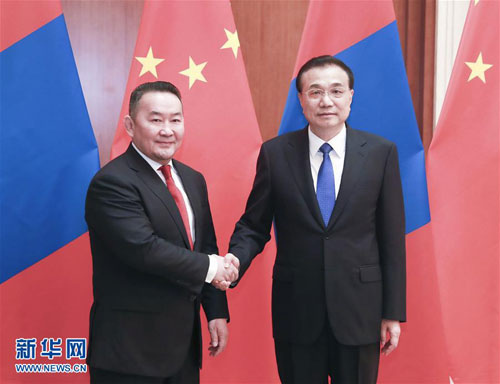 Li Keqiang expressed that China and Mongolia are friendly neighboring countries connected by mountains and rivers. As this year marks the 70th anniversary of the establishment of China-Mongolia diplomatic relations and the 25th anniversary of the revision of the Friendship and Cooperation Treaty between China and Mongolia, relations between the two countries face new development opportunities. President Xi Jinping will hold talks with Mr. President to plan the development of bilateral relations in the next stage. The Chinese side is willing to enhance political mutual trust with the Mongolian side, respect each other's core interests and major concerns, and promote the comprehensive strategic partnership between the two countries to a new level. We are ready to deepen bilateral practical cooperation on the basis of mutual respect, equal cooperation and mutual benefit and reciprocity, align the Belt and Road Initiative with the Mongolian side's Development Road Initiative, speed up the completion of a China-Mongolia free trade agreement and the building of a cross-border economic cooperation zone, and deepen exchanges and cooperation in such areas as agriculture, production capacity and people-to-people and cultural engagement. The Chinese side will continue to provide convenience for the Mongolian side in such aspects as cross-border transportation and port construction.

Khaltmaa Battulga said that to develop mutually beneficial and win-win Mongolia-China relations is the priority of Mongolia's foreign policy. The Mongolian side firmly adheres to the one-China principle and recognizes that Taiwan and Xi Zang are inseparable parts of China's territory. The two sides will always respect each other's core interests. The Mongolian side is willing to strengthen the alignment of the Development Road Initiative with the Belt and Road Initiative, expand cooperation in such areas as trade, energy and infrastructure, and advance the construction of the Mongolia-China-Russia Economic Corridor, in a bid to benefit people in the two countries and in the region.