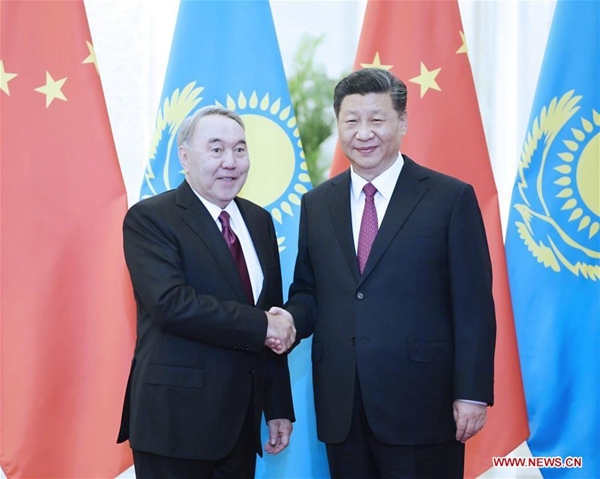 As pioneers of the Belt and Road construction, the two countries should deepen the alignment of their development strategies, promote the facilitation of trade and investment, steadily advance capacity cooperation and strengthen connectivity, Xi said.

He also stressed the need to promote people-to-people and cultural exchanges and enhance cooperation at sub-national level, on security issues and in international affairs.

"I am looking forward to establishing close working relations and friendship with President Kassym-Jomart Tokayev to achieve new progress on the bilateral relations," Xi said.

For his part, Nazarbayev said he would cherish his friendship with Xi forever, saying China is a highly trusted good partner of Kazakhstan.

Congratulating the 70th anniversary of the founding of the People's Republic of China, Nazarbayev said no other country in the world has made so great achievements in such a short period of time.

China's development and the responsibility it shoulders have great significance on the world and humanity, Nazarbayev said.

"Kazakhstan will remain consistent and stable in its internal and foreign policies after my resignation," Nazarbayev said. "Kazakhstan will continue to firmly advance the bilateral comprehensive strategic partnership."

Kazakhstan is ready to deepen its cooperation with China under the framework of the Belt and Road Initiative and supports China's important proposals in international affairs, and supports the joint crackdown on the "three forces" of terrorism, separatism and extremism, Nazarbayev said.

On the same day, Xi awarded Nazarbayev the Friendship Medal of the People's Republic of China at a ceremony held at the Great Hall of the People in Beijing.

Wang Huning, member of the Standing Committee of the Political Bureau of the Communist Party of China (CPC) Central Committee, attended the ceremony.

Nazarbayev expressed thanks to Xi for awarding the medal to him, saying this is a "supreme honor."

He expressed hopes that the Chinese people under the leadership of the CPC with Xi at the core would realize the Chinese dream of national rejuvenation.