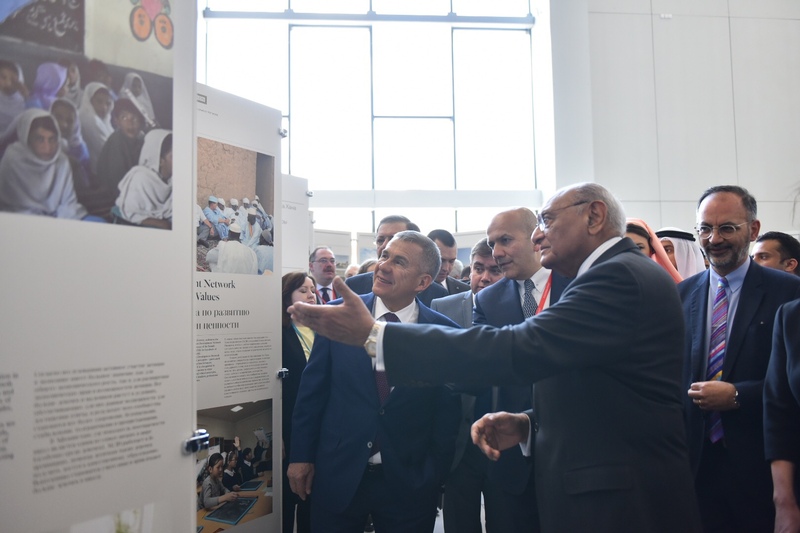 AKIPRESS.COM - At the invitation of H.E. Rustam Minnikhanov, President of Tatarstan, His Highness the Aga Khan was represented by Dr. Shamsh Kassim-Lakha who led the Aga Khan Development Network (AKDN) delegation to the 11th International Economic Summit in Kazan from 24 to 26 April 2019.

On the sidelines of the Summit an Exhibition of AKDN and the Aga Khan Award for Architecture was opened by President Minnikhanov who warmly welcomed the decision of the Award’s Steering Committee to hold the prestigious prize-giving ceremony in the historic centre of Kazan, Russian Federation in the autumn of 2019.

“I was pleased to learn about the Aga Khan Development’s work to improve the quality of life of peoples in diverse countries of the world and it is a great honour for us to receive and to be nominated for the Aga Khan Architecture Award this year. Everything that I saw during the exhibition in Kazan inspires me, because everything in this competition is aimed at the benefit of people. Public spaces are the environments where we live,” underlined President Minnikhanov at the opening of the Exhibition.

The Aga Khan Award for Architecture is one of the oldest major awards in the field of architecture. It selects projects that successfully address the needs and aspirations of communities in which Muslims have a significant presence. The Award recognises examples of architectural excellence in the fields of contemporary design, social housing, community improvement and development, historic preservation, reuse and area conservation, as well as landscape design and improvement of the environment.

“We are gratified by the warm welcome accorded to our delegation by the President and the Government of Tatarstan at the Economic Summit and their kind offer to host the Architectural Award Ceremony in Kazan. The city’s renowned and remarkable monuments recalling centuries of Muslim civilisations in Russia, recognised as World Heritage Sites by UNESCO, provide a most fitting setting for the Award Ceremony,” said Dr. Shamsh Kassim-Lakha, AKDN Diplomatic Representative in the Kyrgyz Republic and Chairman of Board of Trustees, University of Central Asia.

The Kazan Summit is a major international forum that serves to promote economic cooperation between the Russian Federation and countries of Islamic World. In 2019 the Summit brought together over 3,500 delegates representing more than 70 countries across the world who engaged in discussions of various issues relating to trade, investments, research, innovations and humanitarian cooperation.