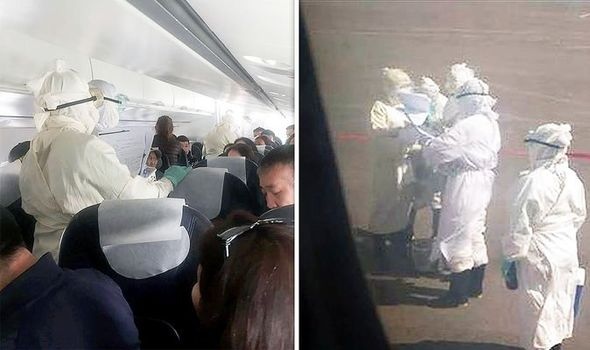 Emergency paramedic staff in anti-contamination suits on a flight (Image: The Siberian Times)

AKIPRESS.COM - A plane has been quarantined after pregnant woman and her husband died of bubonic plague in Mongolia.

Mongolian authorities confirmed the couple from the Ulgii district were infected with the plague after illegally eating a marmot. The 38-year-old man died on April 27, while his wife succumbed to the black death three days later.  They leave behind four children aged between two and 13.

A plane that flew into the nation's capital from the affected area was quarantined.

Seventeen Russian tourists have been unable to return home because of the quarantine imposed in western Mongolia after two plague cases were identified there, the Russian Embassy in Mongolia informed TASS on Saturday.

"Mongolia’s authorities declared a quarantine in the country’s western Bayan-Ulgii province," the embassy said. "It will last from April 30 to May 6. To date, 17 tourists from Russia who remain there have got in touch with us."

According to the Siberian Times, an emergency team from the National Centre of Communicable Diseases boarded the aircraft in hazmat suits to check the 158 passengers on board before they were moved to a hospital.

The plague is caused by a bacterium found on small mammals like rats and marmots. It can kill in as little as 24 hours if left untreated and is believed to have wiped out nearly 50 million people in Asia, Europe and Africa in the 14th century, 9news reported.