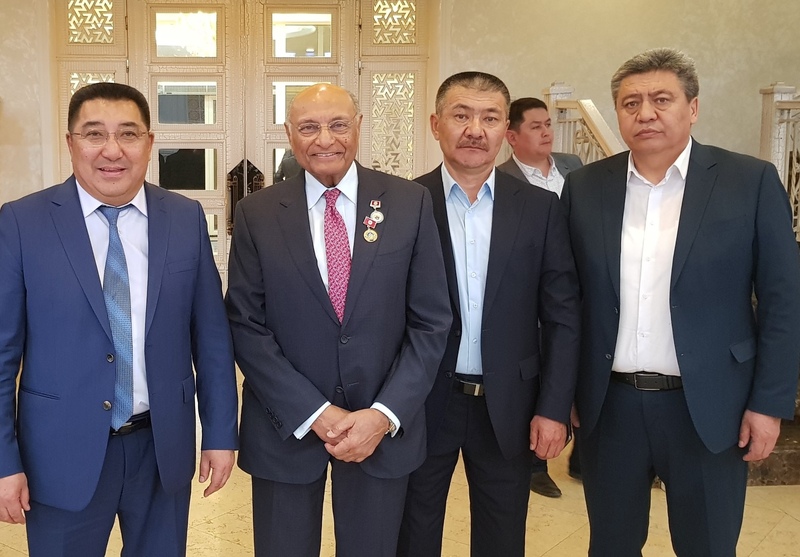 AKIPRESS.COM - In recognition of the contribution of the Aga Khan Development Network (AKDN) to the social and economic development of Naryn, and his leadership of this effort, Dr. Shamsh Kassim-Lakha, Diplomatic Representative of AKDN was conferred Honorary Citizenship of Naryn Oblast as well as Naryn Town on 30 April in Bishkek.

Mr. Amanbay Kayipov, the Governor of Naryn Oblast and Mr. Emilbek Alymkulov, Mayor of Naryn Town along with Mr. Jyrgalbek Botokanov, Chairman of Naryn Town Council presented the honours to Dr. Kassim-Lakha during the Tenir-Too (Naryn) Investment Forum, in the presence of some 400 guests including Members of Parliament, Government officials, social activists, business leaders and artists from Naryn Oblast.

“We are delighted to formally acknowledge the personal attention and contribution of Dr. Shamsh Kassim-Lakha to the development of our Oblast. This honour reflects his vigorous efforts in leading the AKDN towards improving the quality of life of the people and encouraging other development partners from across the country and beyond to support Naryn,” noted Mr. Amanbay Kayipov.

Over the past twelve years AKDN has firmly supported Government-led efforts to develop the country’s regions and especially transform Naryn into an economic, intellectual, cultural and touristic hub. It is the largest private investor in Naryn Oblast with investments of over US$100 million in education, health, rural development, financial services and the iconic campus of the University of Central Asia.

While acknowledging these awards Dr. Kassim-Lakha said, “I am humbled by this honour and express my sincere appreciaton to the leaders and people of Naryn. These tributes recognize the vision of His Highness the Aga Khan in fostering the social and economic development of mountain communities and the region more broadly through the collective efforts of Government, civil society and other development actors. The accolades I have received today also reflect the immense effort and team work by my colleagues at UCA and all other agencies of AKDN”.

AKDN programmes in Naryn cover various development sectors ranging from social and economic development to the preservation and promotion of culture. The most prominent is the University of Central Asia (UCA), a regional, not-for-profit, secular university founded by Kyrgyzstan, Kazakhstan and Tajikistan and His Highness the Aga Khan under an International Treaty in 2000 to promote the social and economic development of the region, especially its mountain populations. The University has served as the major anchor for other investments including the rehabilitation of the Seyitaaly Jakypov Park by the Aga Khan Trust for Culture which also supports the teaching, transmission and performing of indigenous musical traditions and melodies. AKDN’s integrated rural development projects are realised through the Aga Khan Foundation and its implementing partner, Mountain Societies Development Support Programme. The Kyrgyz Investment and Credit Bank and First MicroFinance Company, are helping to stimulate broad-based economic growth and financial inclusion. The Medical and Diagnostic Clinic operated by the Aga Khan Health Services provides quality medical services to improve the health status of people of Naryn.