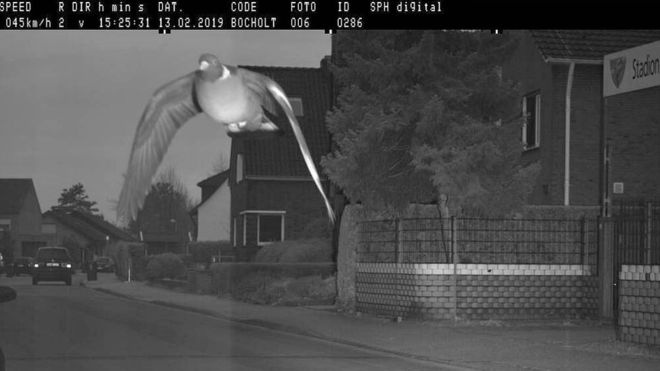 AKIPRESS.COM - It was a quiet afternoon in Bocholt in western Germany when a pigeon broke the calm and the speed limit, flying down a residential street at 45km/h (28mph) in a 30km/h zone.

A mobile speed camera flashed as soon as the pigeon flew past.

Authorities in the town, a short distance from the Dutch border, published the picture last week, and it has since gone viral.

The bizarre event took place in February but Bocholt town hall's Facebook account said it had taken some time to assess the pictures, BBC reports.

The town said that even with a 3km/h margin allowed in speeding cases, the pigeon had been going 12km/h too fast and was "on a collision course with vehicles and pedestrians".

One local said it was clearly a racing pigeon, while another suggested an appropriate punishment would be community service as a carrier pigeon.

The Bocholt Facebook page said philosophically: "Whether and, above all, how the fast bird can and will pay its €25 on-the-spot fine remains to be seen."