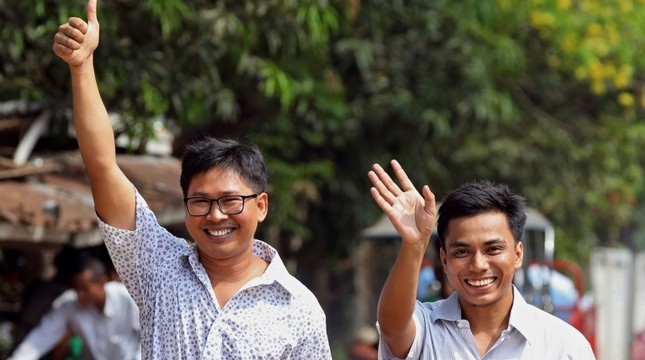 AKIPRESS.COM - Two Reuters journalists imprisoned in Myanmar for their reporting of the ethnic cleansing of Rohingya Muslims have been pardoned and released after spending more than 500 days in jail, Guardian reports.

Wa Lone, 33, and Kyaw Soe Oo, 29, were arrested in December 2017 and accused of breaking the colonial-era Official Secrets Act, and have been imprisoned in Yangon’s Insein jail ever since.

The pair were released on Tuesday as part of an amnesty of 6,520 prisoners by President Win Myint. The chief of Insein prison, Zaw Zaw, confirmed Wa Lone and Kyaw Soe Oo had been freed.

Speaking moments after his release, Wa Lone said: “I’m really happy and excited to see my family and my colleagues. I can’t wait to go to my newsroom. I am a journalist and I am going to continue to be.”

Images showed Wa Lone and Kyaw Soe Oo’s emotional reunion with their wives and children hours after being released. Wa Lone’s first child, Thet Htar Angel, was born while he was behind bars so this was the first time he was able embrace his daughter as a free man.

Kyaw Soe Oo was pictured holding his daughter, three-year-old Moe Thin Wai Zan, tightly. During the trial she would steal brief embraces with her father outside the courtroom before he was bundled back to jail and would cry “Papa, Papa!” as the van drove off. “Now the three of us can hug each other and we are so happy for that,” said his wife Chit Su Win.