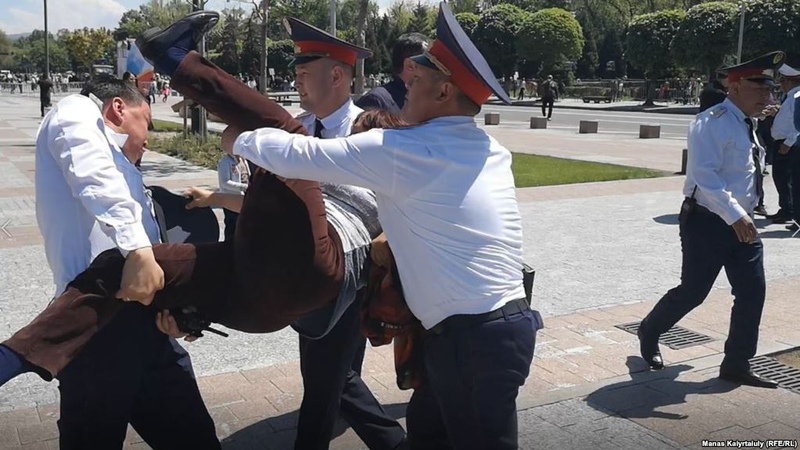 A protester is arrested in Almaty.

AKIPRESS.COM - Police in Kazakhstan have detained several antigovernment protesters who staged demonstrations during ceremonies to mark the 74th anniversary of the Allied victory against Nazi Germany in World War II, RFE/RL reports.

Meanwhile, many social media apps and news websites were inaccessible from Kazakhstan on May 9 -- including the website of RFE/RL's Kazakh Service.

RFE/RL correspondents witnessed the detention of at least one protester in Nur-Sultan, the capital, and several in Kazakhstan's largest city, Almaty.

The developments came a day after Kazakhstan's Prosecutor-General's Office called on citizens not to hold or take part in unsanctioned rallies on Victory Day -- warning of 'harsh" punishment for such activities.

Earlier, fugitive former banker Mukhtar Ablyazov, a vocal critic of the Kazakh government, who lives in France, called on Kazakh citizens via the Internet to hold protest rallies during the Victory Day celebrations.

The detentions of protesters on May 9 came while RFE/RL's site was accessible across Kazakhstan only via VPN or proxy services.

Kazakh officials have not given an official explanation and representatives of the Information Ministry, National Security Committee, and Kazakhtelecom were not available for comments.

Several protests have been held across the country recently, an indication of growing discontent with the political system that has been dominated by former President Nursultan Nazarbaev since before the 1991 Soviet collapse. Nazarbaev retains the title of Leader of the Nation despite his stepping down as president in March.