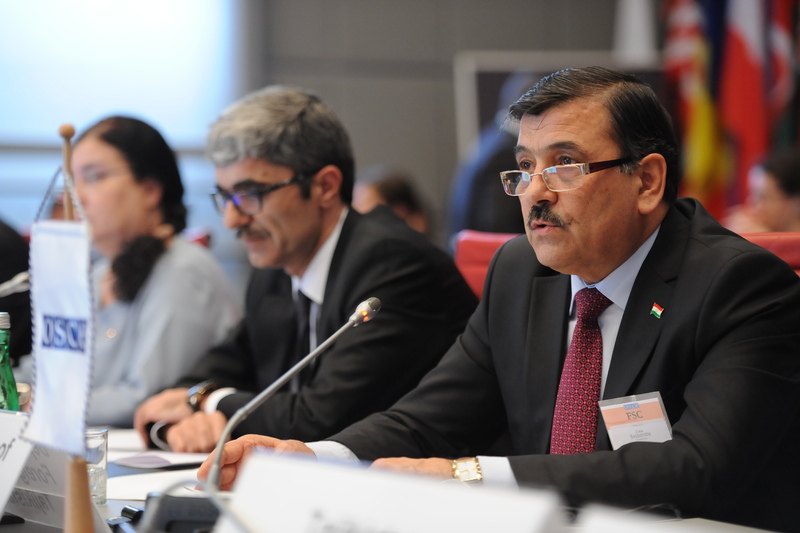 AKIPRESS.COM - Politico-military co-operation in Central Asia, how to increase women’s participation in decision-making processes in the security sector, and eliminating the threat posed by small arms and light weapons and stockpiles of conventional ammunition are among the priorities of Tajikistan’s Chairmanship of the OSCE Forum for Security Co-operation (FSC), which the country’s Deputy Foreign Minister Zohir Saidzoda formally opened in Vienna on May 8.

Addressing representatives of OSCE participating States and Partners for Co-operation at the FSC, Saidzoda said that Tajikistan intends to perform its duties as Chair in good faith, guided by the established principles of equality, mutual respect, balance and continuity. It was the first time that his country assumed the role of FSC Chair, he added.

“Our main task will be to continue the ongoing work in further improving the control mechanisms in the politico-military field,” he said.

Saidzoda said that his country sees the OSCE as a unique regional organization capable of addressing a wide range of security and co-operation issues with significant potential for effective action.

He highlighted the already close co-operation between his country and the OSCE in the politico-military field, and said that Tajikistan’s FSC Chairmanship would build on this.

“As of today, in Tajikistan, about 26,000 units of seized small arms and over 30 tonnes of surplus ammunitions were destroyed by the OSCE. Between 2009 and 2018 some three million square metres of land contaminated by landmines and unexploded ordnance were cleared,” he said.

How to counter the threat of small arms and light weapons and stockpiles of conventional ammunition across the OSCE region would be among the Tajik Chair’s priorities, he said.

Referring to his country’s other priorities, Saidzoda said: “A special focus of Tajikistan’s Chairmanship will be drawing the FSC’s attention to politico-military aspects of security in the Central Asian context, and the need to strengthen the OSCE’s co-operation with regional organizations in Central Asia.”

Linked to this is the security situation in Afghanistan, he said, where “the presence of an immense number of munitions and weapons in the northern territories of Afghanistan suggests that the long-term border situation will remain unstable.”

He added that Tajikistan will also hold discussions on the importance of the role of women in the security sector, in particular their participation in decision-making.

Other areas of focus will include strengthening the implementation of United Nations Security Council Resolution 1540 on the non-proliferation of weapons of mass destruction; confidence-and security-building measures in the politico-military area; and continued efforts to consolidate common positions among States on the updating of the Vienna Document.

“Tajikistan hopes to contribute to the promotion of genuine dialogue,” he said. “I assure you that Tajikistan will conduct its FSC Chairmanship on the basis of a balanced and impartial approach.”