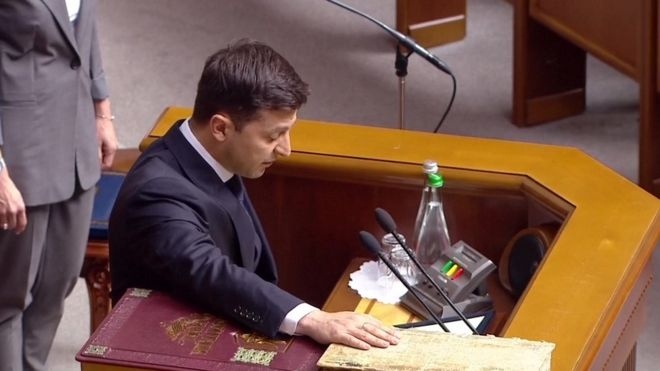 AKIPRESS.COM - Ukrainian comedian Volodymyr Zelensky has been sworn in as the country's new president at a ceremony in the capital Kiev on May 20.

He ousted incumbent Petro Poroshenko who had been in power since 2014.

Mr Zelensky has promised to tackle corruption and bring an end to the war with Russian-backed rebels in the east.

The former television actor has said little since his resounding victory on 21 April.

At the ceremony, Mr Zelensky was given golden symbols of office, including a sceptre, which he held aloft in a victory salute, BBC reports.

A choir in folk costume sang patriotic hymns to welcome him.

Russian state TV said no Russian official had been invited to the inauguration.

Mr Zelensky is delivering his inaugural address in Ukrainian.

But at one point, referring to the conflict in the east, he switched to Russian, saying: "I'm convinced that for this dialogue to start, we must see the return of all Ukrainian prisoners" - apparently a message to the Russian government.