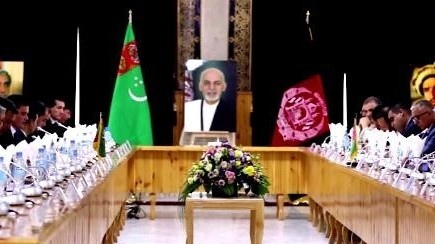 AKIPRESS.COM - A high-level delegation from Turkmenistan visited Herat province on Sunday where they said that all preparations are on track to implement the Turkmenistan-Afghanistan-Pakistan-India (TAPI) gas pipeline project, Tolo news reports.

Delegates from the two sides signed agreements on expansion of Turghundi-Herat and Aqina-Andkhoi railway projects including the expansion of power distribution to Herat city and practical implementation of TAPI and TAP projects.

The Acting Minister of Finance, Humayun Qayumi, said Afghanistan is expected to import military uniforms from Turkmenistan for members of the Afghan security forces in exchange for marbles.

“The Turkmen team told us that during the current year, practical work will start from Turkmenistan towards Herat,” Qayumi said.

The trans-regional energy project, which will carry gas from Turkmenistan, through Afghanistan to Pakistan and India is being hailed as a major initiative for bringing peace and enhancing connectivity in the region.

Reports indicate, however, at an earlier completion date of 2018.

TAPI's construction is led by state gas firm Turkmengas but none of the global energy majors have so far committed to the project that will cost as much as a third of Turkmenistan's total 2016 budget.