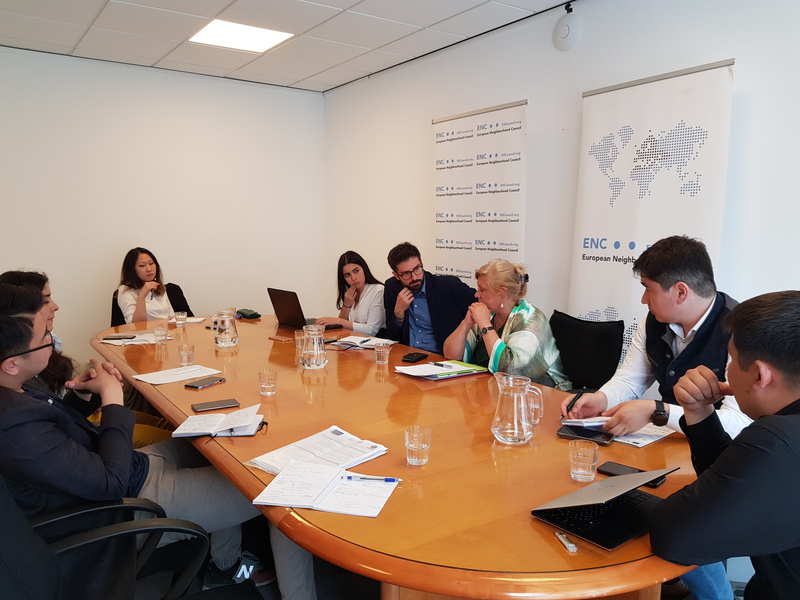 The cooperation between the EU and Central Asia countries is planning to start its realization based on the new joint communication program which is promoting and taking course to the development of relations and new opportunities for a stronger partnership and to prevent security challenges in those countries.

Education is a very significant instrument to fight against radicalization. Karin Heremans, said during the meeting with journalists from Central Asia on June 4th in Brussels: “Education is very important, therefore we are promoting holistic multi-agency approach. I think militants from ISIS, they follow the course and use NLP (Neiro lingvistic programming) methods. This approach based on three components, it’ is a triangle and consists of environment, behavior, and talents. ISIS can identify youth talents and through its change people’s behavior”.

By considering different social groups, we could say that youth is a vulnerable group and they easily could be used as the power and weapon because they do not have enough knowledge, experience and could easily get under such programming from radicals. Karin Hermans emphasized the importance and explained how they work on these issues, she said “… in my daily practice in school we focus on identity policy, we make the student aware of the influences of the behavior”.

She emphasized to prevent radicalization for a child it is very important to invest in the environment. “… what radicals are doing is focusing on environment and also focus on some limit of system, they are cutting from the environment, they are trying to isolate children or adults it is like chamber that is what in communications happens, chambers of radicals views and at the same time cutting from other environments so person becomes isolated and to prevent and deradicalize it, we need just to inverse” said Ms. Heremans.

By trying to prevent the radicalization process, RAN has developed special manual in terms of the education sector and which has covered important parts and control of these components which could positively influence on prevention radicalization. During the meeting Karin Heremans emphasized “… this manual focuses on 4 topics: a teacher, schools, partners of the school and the government and it is multi-agency approach so we are promoting training for teachers; communication training. We train school principals to develop policy on radicalization because now it becomes usual and 3-4 years ago no one wants to talk about it and now it is fashion word and in our countries, we confronted it these days. We and other experts developed this vision and we had meetings and met with each other and we developed policies based on our daily practice and share with those things”.

Kyrgyzstan is not an exemption and as a country in Central Asia, cannot avoid the dangerous influence of the terrorists and groups of extremists. Extremist activities could endanger human lives, Kyrgyz society’s structure and lead to the destruction and instability in the country.

According to the ‘’Global Terrorism Index” for 2018 Kyrgyzstan is ranked 80 out of 163 countries, while Usbekistan on 132nd place. 1,945 extremists (7.4 per cent women), were registered with the internal affairs ministry in 2015. The security services states that 508 men, women and children – 70 per cent ethnic Uzbeks, 24.9 per cent women of both ethnicities – have left for Syria, but privately indicate this is an underestimate”.

The process of radicalization could progressively grow because of several factors:

• Youth to see religion as an alternative political identity and potential ruling system.

A lot of people could become victims of destructive radicalization, therefore, its prevention and key knowledge of useful policies and working approaches should be disseminated and practiced to tackle radicalization.

The RAN is working on solving these concerns and developed some strategies and recommendations which could be useful for Kyrgyzstan to adapt:

• Community and society’s engagement can be a valuable tool for preventing violent extremism and radicalization of people.

• Prosecution and imprisonment is the approach of Triple-P and risk-management:

1. All institutions including, police, prisons and probation services, should work in collaboration with radicalized offenders during the detention period and after a release from imprisonment to decrease the risk of recidivism to violent extremism.

2. The coordination, monitoring and control of the different profiles of returnees to decrease and avoid the possible negative influence of imprisonment for low-risk returnees and should involve the following steps:

Every case is different but to help them to re-socialize we need to have professionals, experts and use valuable international experience and expertise to tackle with this global problem.