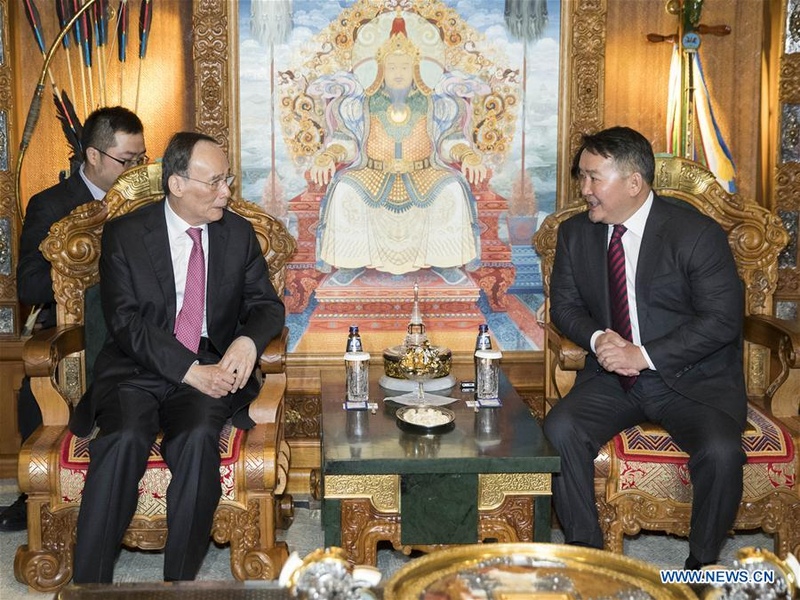 AKIPRESS.COM - Chinese Vice President Wang Qishan said that China is ready to join the Mongolian side in constantly enriching their comprehensive strategic partnership.

Wang made the remarks during his Wednesday meeting with Mongolian President Khaltmaa Battulga. He wrapped up his three-day visit to Mongolia on Friday.

He said cooperation has remained the mainstream of the China-Mongolia relationship since the establishment of the diplomatic ties between the two countries 70 years ago, Xihuna reports.

Noting that as the bilateral relations are standing at a new historical starting point, he called on the two sides to firmly keep to the right political direction, and become each other's strategic partner of mutual respect and trust, friendly partner of frequent exchanges, as well as cooperative partner of mutual assistance in multilateral affairs, and of mutual benefits.

Beijing, he said, is willing to work with Ulan Bator in maintaining high-level guidance over the development of bilateral ties, consolidate political mutual trust, deepen mutually beneficial cooperation and cultural exchanges, and step up their regional and international cooperation.

Battulga said the Mongolia-China relationship over the past 70 years has gone through different stages of development, and has become a model for friendly cooperation among nations.

The Mongolian side is ready to push forward the development of bilateral ties on the basis of respecting each other's core interests and major concerns, and to further strengthen bilateral cooperation in trade, investment, and cultural and people-to-people exchanges, so as to promote common prosperity.

During his meeting with Khurelsukh, Wang said China and Mongolia are two close neighbors, and Beijing considers its relations with Mongolia a key priority in its neighborhood diplomacy, and has constantly enriched the bilateral ties with new contents and vitality.

Mongolia is welcome to board the express of China's economic developement and to deepen the alignment of the China-proposed Belt and Road Initiative (BRI) and Mongolia's Development Road program so that bilateral economic and trade cooperation can bear more substantial fruits.

The Chinese side is willing to work with its Mongolian counterpart in holding the third Mongolia-China expo, strengthening border port exchanges and infrastructure construction so as to build up lasting peace and common development and prosperity in the border area, said Wang.

He also suggested that the two sides hold a series of heart-warming, down-to-earth and influential exchange activities to celebrate the 70th anniversary of their diplomatic ties in a bid to enhance mutual understanding of the two peoples, and consolidate the foundation of the China-Mongolia friendship, adding that China also wants to join the Mongolian side in boosting cooperation both at national and local levels, actively pushing forward the trilateral cooperation of China, Mongolia and Russia, and accelerating the construction of the China-Mongolia-Russia Economic Corridor.

Khurelsukh said his country has always held the development of a friendly and mutually beneficial cooperative relationship with China as a diplomatic priority, adding that China's neighborhood diplomacy that follows the principles of amity, sincerity, mutual benefit and inclusiveness has greatly promoted the Mongolia-China relationship, while the sound synergy of Mongolia's Development Road program with the BRI is bringing benefits to Chinese and Mongolians.

The Mongolian side, said the prime minister, admires China's achievements in development, appreciates China's selfless assistance, supports the BRI, and adheres to the one-China principle, adding that the country is willing to expand practical cooperation with China in various forms and constantly enrich the two countries' comprehensive strategic partnership on the basis of respecting each other's territorial and sovereign integrity, the rights to choose their own development path and the principle of equality and mutual benefit.

Ahead of their meeting, Khurelsukh held a grand welcome ceremony at the government palace in the capital city. The two leaders also witnessed the signing of a series of cooperation documents, and inaugurated the completion of a new airport highway and the commencement of the Nalaikh inter-city road.

When meeting with Zandanshatar, Wang said China's continuous development will create greater development opportunities for all countries, including Mongolia, and China stands ready to exchange and share development experience with the Mongolian side.

Wang said the exchanges between the two countries' legislative bodies are an important part of the China-Mongolia political exchanges, and the two sides can learn from each other in such fields as governing a country and building up their legal systems.

The two sides should continue to strengthen people-to-people and cultural exchanges of various forms and foster new forces for the development of bilateral relations, Wang added.

For his part, Zandanshatar said the BRI has become a new model for global cooperation in the new century and for a new era. Mongolia highly appreciates China's foreign policy that features mutual benefits and win-win outcomes and the country's global influence.

Zandanshatar said the Mongolian side insists that Tibet and Taiwan are inalienable parts of the Chinese territory and these relevant issues are China's internal affairs, adding that Mongolia is willing to deepen friendly exchanges between the ruling parties of the two nations.