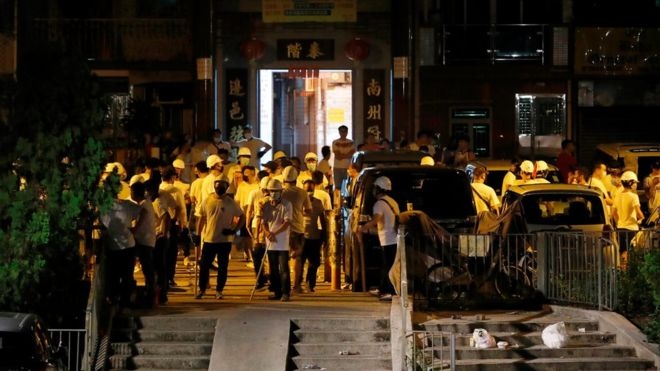 
Footage posted on social media showed the men, all in white T-shirts, violently attacking people on platforms and inside train carriages.

Forty-five people were injured, with one person in a critical condition.

The mob attack followed the latest pro-democracy rally in the centre of Hong Kong, where riot police had fired tear gas and rubber bullets at protesters.

It is unclear who the mob were, but they attacked passengers and people making their way back from the protest.

In a statement, the government said that in Yuen Long "some people congregated at the platforms of the MTR station and train compartments, attacking commuters".

"This is absolutely unacceptable to Hong Kong as a society that observes the rule of law. The SAR [Special Administrative Region] Government strongly condemns any violence and will seriously take enforcement actions."

The mob stormed Yuen Long MTR station at about 22:30 local time (14:30 GMT), hours after clashes between protestors and police in the Sheung Wan area earlier in the day.

Yuen Long is a more remote district of Hong Kong, and is far away from the site of the main pro-democracy protests.