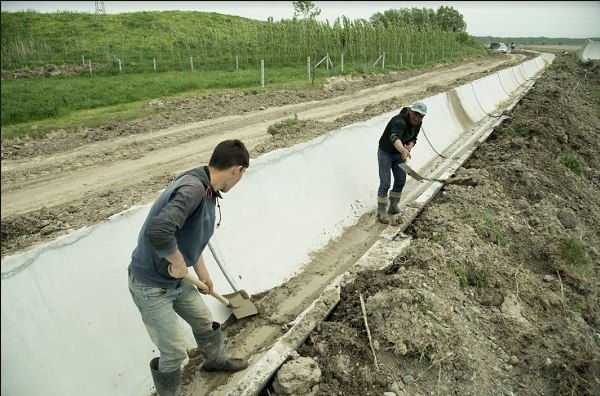 AKIPRESS.COM - The seasonal shortage of irrigation water in the Aiyl Aymak of Birlik, Kadamjay district of Batken oblast, was solved with the help of the Aga Khan Foundation's project “Improving Stability and Better Natural Resources Management in Kyrgyzstan and Tajikistan” and implemented with the support of the British Government (UK Aid), Aga Khan Foundation said.

The water supply of 600 hectares of land for more than 1,000 households has been improved through the construction of a feeder canal, where a 240-meter drainage system, a 60-meter pipe crossing, 60 protection dam, and 110-meter concrete canal from the Uuru-Sai river were constructed, the Aga Khan Foundation said. The Water Users Association and the Ayil Okmotu also cleared about 5 kilometers of the ground canal.

Improving irrigation in the agricultural lands of the villages of Syrt, Vartan, Kakyr, Molo, Chechme, and Beliyl Aymak Birlik will help to resolve issues such as migration, conflicts due to insufficient irrigation water and increased income from agriculture. The local population is 7,229 people or 1,125 households.

“Irrigation water was not enough for 400 out of 800 hectares of land during the season, when the water level of the Gorotu Canal decreased and did not reach the land on the end of the canal. In recent years, these lands became conditionally irrigated, where they began to use them for perennial grasses or were not used at all. That is why the locals asked to build a supply canal from the Uuru-Sai river,” said local authorities.

The opening ceremony on the occasion of the reception-transfer of the constructed facility was held on July 23, 2019, in the Birlik Ayil Okmotu, Kadamjay district. The British Ambassador to the Kyrgyz Republic, the leadership of the Aga Khan Foundation, the Plenipotentiary Representative of the Government of the Kyrgyz Republic in the Batken region, the akim of the Kadamjay region, representatives of local government and the project beneficiaries participated in the event.

The UK Government, together with the Aga Khan Foundation and partner non-governmental organizations, is implementing the project “Strengthening Stability in Kyrgyzstan and Tajikistan through Effective Management of Natural Resources”, to improve the availability of infrastructure, increase the capacity of local institutions to effectively use and co-manage natural resources, including water and pasture infrastructure, increasing the knowledge of young people and the local population about the importance of rational use of GOVERNMENTAL and pasture resources, as well as training tools and approaches to mitigate conflict sensitivity ensuring continuity of opportunities for civic and environmental education and training for young children, youth and non-formal groups living in conflict-affected areas.